I hope to write a few posts in coming days on the Brexit win. I thought, though, that I would begin with Donald Trump. His reaction to the winning vote is further evidence, I believe, that he is not just another right-liberal Republican. Read it and see if you agree:


The people of the United Kingdom have exercised the sacred right of all free peoples.

They have declared their independence from the European Union, and have voted to reassert control over their own politics, borders and economy.

A Trump Administration pledges to strengthen our ties with a free and independent Britain, deepening our bonds in commerce, culture and mutual defense.

The whole world is more peaceful and stable when our two countries – and our two peoples – are united together, as they will be under a Trump Administration.

Come November, the American people will have the chance to re-declare their independence. Americans will have a chance to vote for trade, immigration and foreign policies that put our citizens first.

They will have the chance to reject today’s rule by the global elite, and to embrace real change that delivers a government of, by and for the people.

I hope America is watching, it will soon be time to believe in America again. 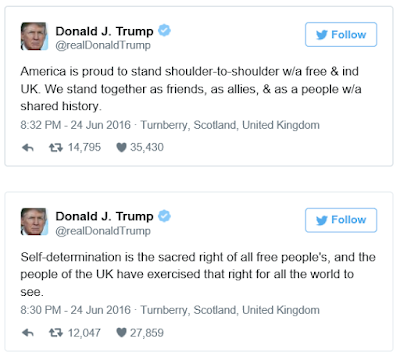 On the national issue, at least, Trump is pulling political debate back in the right direction. It seems to me that there are two fields of politics. There is the field you operate in at a more purist level, where you try to articulate your politics in a logical and principled way and clearly distinguish your politics from the competition. Then there is the field where you don't necessarily expect your own purist vision to be fully implemented, but instead you join in a struggle to pull things in society your own way.

The two fields don't run counter to each other. The more that you try to build up a stronger, purer principled movement, the more weight you have in drawing things your own way. And the more you succeed in bringing the centre toward your own politics, the more success you are likely to have in building your more purist movement.

So we shouldn't look at Trump just through purist eyes, but at what his effect on the larger political climate is likely to be. I might be wrong, but I think he will shake it up, open it up, in a good way. I think he will unsettle the right-liberal hold over the Republican Party, open up debate on the national issue, and even perhaps (as suggested above) reconfigure international alliances in an interesting way.

In the meantime, our task remains the same - to develop a principled political movement that can be one part of those forces pulling the larger political culture in our direction.
Posted by Mark Richardson at 7:17 pm