So why is the future female? 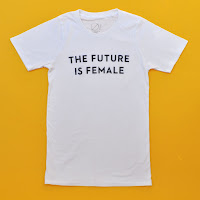 I was walking through a local shopping mall some time ago when I saw an unusual advertising slogan painted on a shoe shop window. It read simply "The Future is Female".

Now, I'm a bit late to this party, as it turns out that what follows is already common knowledge among some groups online, but this slogan has an extraordinary origin. It comes from the title of a manifesto published in 1982 by a radical lesbian separatist feminist by the name of Sally Miller Gearhart:

Gearhart outlines a three-step proposal for female-led social change from her essay, "The Future–-If There Is One–-is Female":

I) Every culture must begin to affirm a female future.

II) Species responsibility must be returned to women in every culture.

III) The proportion of men must be reduced to and maintained at approximately 10% of the human race.

Gearhart meant, quite literally, that the future would be female - she thought that through the use of modern technologies of cloning and ovular merging that a society made up overwhelmingly of females could be created.

It gets more interesting. Gearhart feared the existence of male spaces:

Gearhart does not base this radical proposal on the idea that men are innately violent or oppressive, but rather on the "real danger is in the phenomenon of male-bonding, that commitment of groups of men to each other whether in an army, a gang, a service club, a lodge, a monastic order, a corporation, or a competitive sport." Gearhart identifies the self-perpetuating, male-exclusive reinforcement of power within these groups as corrosive to female-led social change. Thus, if "men were reduced in number, the threat would not be so great and the placement of species responsibility with the female would be assured."

As so often happens, what was radical in 1982 is less so today. Gearhart's radically separatist feminist message is now so commonplace that it can be used to attract customers to a shop in a suburban mall. And in the decades after 1982 most male spaces in society were made unisex - from the boy scouts, to football clubs, to the army.

Gearhart managed to combine this hostility to men and to the masculine with high-minded professions of her commitment to universal love, declaring that "love is the universal truth lying at the heart of all creation". I suspect that leftists are attracted to such professions because they leave our real commitments formless and indistinct. But this very commitment to formlessness is now making Gearhart's slogan less meaningful. We live in a society that dares no longer to clearly define who or what a woman is, and it is thought wrong to define things as masculine or feminine or even to assert a "gender binary". In this scenario, the future is simply unsexed.