I ventured into left-wing Twitter recently. A poster had asked how his fellow left-wingers would describe those on the right in a single word. The most interesting answer was this:

I don't think this is right at all and said so:

It led to an exchange which made it clear that what traditionalists believe to be the common good differs greatly from the leftist understanding. The leftists pointed me to an article on Sweden the gist of which was the idea that Sweden was oriented to the common good up to the 1980s when the Social Democrats began to privatise the economy; it then led to a period of growing inequality which all sides of politics are now attempting to overcome.

Here is the leftist ideal:

The centre-left has governed the country for 81 of the past 100 years, striving to be “the people’s home” – or folkhemmet – in which the social democratic state was like a family, caring for all and with no one left behind. Sweden became one of the most socially equal countries in the world.

So the "common good" means that the state ensures social equality, which apparently means a levelling out of all kinds of distinctions - of class, of ethnicity, of sex:

Karl Möller seems an unlikely poster child for a war on inequality. He is the lone male among a dozen women, each with a baby in her arms.

Möller, 45, is part of a city-wide programme in Gothenburg to mix social classes, genders and ethnicities to make Sweden’s second city a more equal place to live.

New integrated “family centres” such as this one, which opened in March, aim to target support at the families who need it most. “It is important for us to be in mixed areas to create more equality,” says manager Helen Antonson.

This concept of a common good hasn't worked on its own terms - Sweden has seen a growing inequality in income and health for some time. Worse, though, is that the concept itself is misconceived: it dissolves many of the connections between people through which stable forms of community are formed. It therefore tends to create anomie and social withdrawal - an excessive individualism rather than community and a common good.
Consider the following graph comparing the percentage of lone person households in Europe in 2016: 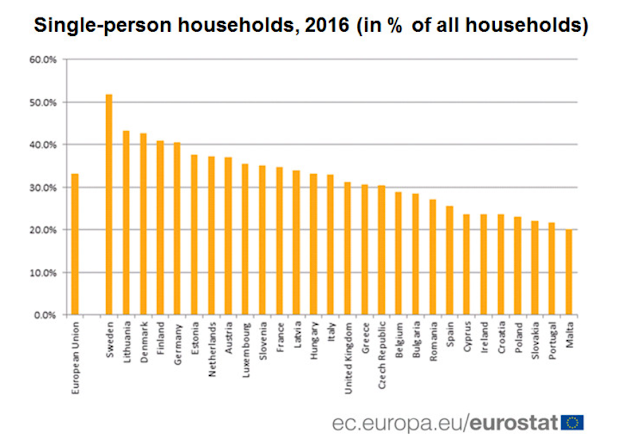 In Sweden the percentage is double some other European countries. In other parts of the world the corresponding figure is often under 10%: 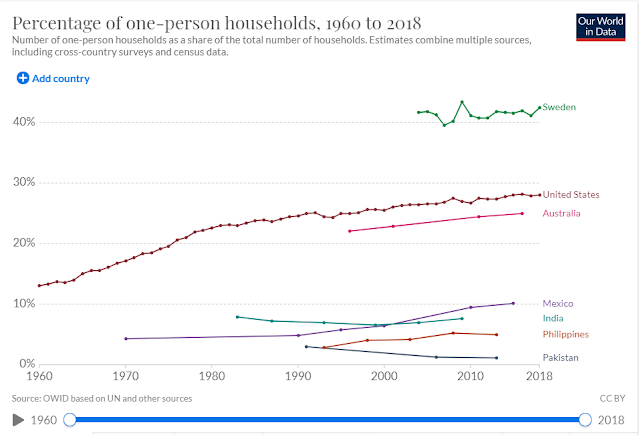 Why do so many Swedes live alone? One Swedish historian put it this way:

Why, then, does Sweden stand out when it comes to the high number of single households? Trägårdh says that Sweden is a "radically individualistic" country with a social structure that enables people to live independently - that is, to avoid having to rely on one another.

"It has something to do both with values and with the types of institutions we have created in Sweden in more recent decades," explains Trägårdh.

"Individual autonomy has been important for a long time here."

To try to make what is happening here clearer, think of it this way. The Swedes are starting out with an individualistic view of man, i.e. that we create meaning for ourselves as autonomous, self-defining individuals. The "common good" part only comes later and consists of a commitment to a state sponsored egalitarianism, in which distinctions between people are levelled.

A traditionalist common good looks very different because it begins with our view of man, namely that our own good is inextricably intertwined with the good of the larger natural forms of community we belong to, and through which we obtain aspects of our identity, our social commitments, our roles and purposes, our loves and attachments, our connection to a particular culture and tradition, and our connection to generations past, present and future.

The leftist "common good" emphasises independence over interdependence and it wants to level away the distinctions on which a traditional common good is formed. As an example of this mindset, consider the way that Monica Silvell, a Swedish bureaucrat, explains the change of ideas about men and women in Sweden:

The old view of men and women complementing one another was replaced by the notion that the sexes were basically similar.

There is a levelling of distinctions ("the sexes were basically similar) and a loss of interdependence ("the older view of men and women complementing one another"). There is no "common good" here anymore, in the sense of the sexes needing each other to fulfil aspects of their own selves. The "common good" becomes, instead, something very different: a commitment to the egalitarian liberal state. As we have seen, this leftist "common good" tends to create "aloneness" rather than stable forms of community.