Listening in to liberal friends has made me increasingly aware of how they process moral issues. These people are often highly conscientious and being moral is important to them. But they draw every question back to the same thing. It doesn't matter what the original topic was, it will end up with a nodding agreement about racism or, less frequently, about sexism or more generally discrimination or inclusion. I suspect that, from their point of view, they see themselves as promoting "fairness" in doing so.

This liberal outlook has colonised nearly everything and everyone in a city like Melbourne. If you go to Christian school websites, for instance, the most prominent expression of their values will be inclusion. Some of my liberal friends see themselves as sincere Christians, and attend church services regularly, but their moral framework is still this liberal one.

The problem is that the liberal framework undermines a very significant aspect of moral character. For most of Western history, it mattered that an individual was "true", in the sense of being loyal and faithful to the significant communities he belonged to and to the particular offices he filled within these communities. These communities were richly diverse. There might be a faithfulness to God, to a church, to a religion, to a spouse, to our children, to our extended family, to our nation or people, to the crown, to our local community, our region, our race and our civilisation.

A faithfulness to these communities and particular relationships then helped to motivate an ethos of service and duty. It also gave the individual a place within longstanding communal traditions, so that the individual might see himself as a bearer of that tradition, which not only dignified his responsibilities, but also drew him more closely into a particular culture, and put him in a relationship not only to his own generation, but to past and future generations.

When we uphold this ethos of fidelity, much else follows. If you are faithful to your own tradition, then you will be concerned with the good of that tradition, and this will then mean a wider concern with family life, with culture, with the environment, with the economy, with education and so on. You become more strongly motivated, in other words, to uphold healthy family formation, or to organise the economy so that it does not undermine the family, or to create an environment that will elevate rather than degrade those who live within it.

The word "true" originally did not mean "consistent with fact":

You can see here the clustering of moral qualities that the word was used to denote. The liberal moral framework, however, not only ignores the quality of being "true" but undermines it. I get moral points as a liberal if I discard loyalty to my own tradition, so that I do not discriminate. There is a deeply set belief amongst most white liberals that if a white person shows pride in or loyalty to their own traditions, that they are committing a moral evil. This is an inversion of the older view that to be "true" was an essential mark of good moral character.
Moral foundations theory
What I have observed about my liberal acquaintances aligns with research undertaken by Jonathan Haidt. His book The Righteous Mind was published in 2012. He found that liberals focus on just two moral foundations, namely fairness and harm. Conservatives, in contrast, have an equal focus on all five of his moral foundations. 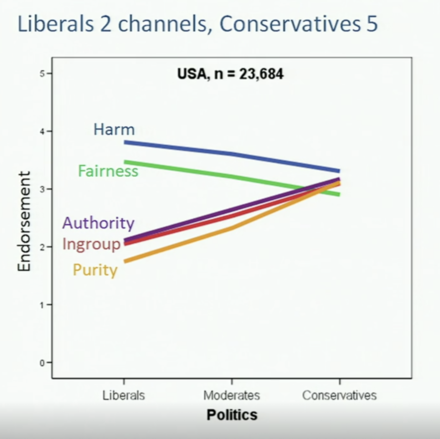 According to Moral Foundations Theory, differences in people's moral concerns can be described in terms of five moral foundations: Individualizing cluster of Care and Fairness, and the group-focused Binding cluster of Loyalty, Authority and Sanctity.

Conservatives have an equal concern for treating individuals with care and fairness but also in fostering loyalty to the groups that individuals belong to. Liberals focus more narrowly on the "individualizing cluster".
Faithlessness
Why would liberals not see loyalty to natural forms of human community as an important moral quality?
One thing to consider here is the metaphysics of liberal modernity. Thomas Hobbes, for instance, based his world picture on the idea that humans in a state of nature were set against each other, that life was a war of all against all. If individuals coexist at all, in this view, it is only through a social contract. The ends of life, for Hobbes, were also individualistic: the aim was to have the power to follow our own individual passions without external constraint.
There is little place for fidelity within this world view. Human communities are not formed around loyalty, in the Hobbesian philosophy, but through a social contract that has to be enforced by overwhelming governmental power. Nor for Hobbes is meaning to be found within natural forms of community, but rather through an individual "vector of desire".
As this type of metaphysics, over time, penetrated more deeply into Western culture, it is hardly surprising that the group-focused moral foundations receded, leaving only the individualising cluster.
Posted by Mark Richardson at 3:21 pm 5 comments: