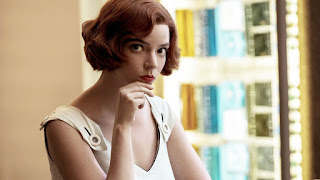 One of the most popular TV shows this year was The Queen's Gambit. It is based on a 1983 novel by an American writer, Walter Tevis. In brief, it tells the story of an orphaned girl, Beth Harmon, who becomes a chess prodigy in the 1950s and 60s.

Like most other people I enjoyed watching the series (it has a 99% approval rating on Rotten Tomatoes). One striking thing about the series, that soon becomes apparent, is the lack of rancour toward men and toward the era in which it is set. The men generally act as admirers of Harmon and become her willing mentors. Nor is there much heavy-handed criticism of the larger society; instead considerable attention is paid toward period detail. It is striking, too, that the character of Beth Harmon is allowed to be visibly feminine. She spends most of her time wearing beautiful outfits of the era - she is not the usual mannish type of heroine.

So that's the good part. There is, unfortunately, a more negative aspect of the series to report on. There is a tussle in the story between the forces of tradition (faith, love, service & family) and that of the new order (an independent, glamorous life based on money, consumerism, sex & career). The contest is not made one-sided, but ultimately the new order dominates.

Most disappointing is the way that family is treated. Some old tropes are wheeled out here. The girls who want to marry are portrayed as air-headed, mean girl types who get by, after marriage, with drink. And the only men who are portrayed negatively are fathers, who are coldly cynical and abusive.

I couldn't help but wonder, as I watched, how the new order would work for most ordinary people. We can't all be young chess prodigies feted for our extraordinary talent, achievements, beauty and desirability. The "goods" promised by the new order can only be enjoyed by a relatively small part of the population. And if we only live for ourselves, then how would a Beth Harmon ever survive the difficulties of her childhood? The people who gave themselves to her did so out of charitable love, motivated in part by religious conviction.

For all that, The Queen's Gambit is well-written, well-produced and visually stunning.

Posted by Mark Richardson at 1:16 pm No comments:

What forms of identity do right-liberals permit?

We have for some decades been caught between two opposing political currents, namely a left-liberalism and a right-liberalism, neither of which is supportive of traditional national identity. Clearly, we won't get anywhere until we start to lead people away from both options.

The starting point for both currents is a belief in autonomy: the individual is to be free in the sense that he is self-determining or self-creating and therefore subject only to his own will or reason or desires. This means that whatever is pre-determined, rather than self-determined, is considered an oppressive limitation to be overcome.

For right-liberals, this means rejecting a traditional ethnic nationalism, since this is something we are born into rather than being voluntary and self-chosen. The types of identity right-liberals would allow us to have would be relatively inconsequential ones, such as membership of sporting clubs.

The left-liberal view has developed over time in a more complex direction. There is a major strand of thought on the left which believes that the regeneration of human nature will only take place when power structures have been abolished. At first, these power structures were thought to be mostly class based. But in recent decades the emphasis has been on race and sex (whiteness and patriarchy).

This means that leftists do not simply see "white identity" as a limitation on autonomy that the forces of progress will increasingly make redundant, but as a baked in power structure that violently oppresses others. The left does view race as an artificial social construct that will eventually be abolished, but at the same time it also frames politics around race (and sex), with "whiteness" being the evil element and "colour" being the positive liberationist one.

If you are a white person, the right-liberal position can seem comforting as it does not frame you as an evil oppressor. To illustrate, however, why it is a mistake to resort to right-liberalism, consider the article by Robert Lynch in Quillette titled "Kin, Tribes, and the Dark Side of Identity". The hostility of right-liberals to any substantial forms of communal identity are very clearly spelled out by Lynch in this piece.

Lynch begins by admitting that kin group preference is likely a hard-wired evolutionary trait. He admits too that it has a benefit of encouraging social cooperation. He sees it, though, as also involving animosity toward out-groups. Therefore, the task in his view is how to reap the benefits without triggering any negative consequences. His solution is, not surprisingly for a right-liberal, to only permit voluntary, self-chosen forms of group identity:

The key to balancing tradeoffs between cooperation and parochialism lies in understanding that not all groups are created equal. Groups with voluntary memberships that allow people to be part of multiple, transient, and overlapping communities—for example, sports fans, chess clubs, or single-issue political organizations—tend to generate widespread cooperation both within and between groups...In contrast, groups that are formed around fixed, unchanging and non-overlapping identities—for example, sex, race, or ethnicity—while fostering tight bonds between their members, will tend to sow division and cultivate hatred between groups. These groups are likely to breed resentment, foment animosity, and promote tribalism.

Note the degree of negativity that the unchosen forms of identity are associated with. The terms applied, even to something as basic as our sex, are condemnatory ones like animosity, resentment, division and hatred. Note too how shallow the alternative forms of identity are: we are not allowed to be, say, English or men, but we can safely be a member of a chess group. This is supposed to be the new basis of our social commitments and our willingness to make sacrifices for the larger society.

Lynch goes on, again unsurprisingly, to criticise the left for framing politics around categories like sex and race. The language he uses is predictable:

It isn’t hard to imagine what happens to bridging social capital when our stone age brains make contact with a culture that sanctifies the most visible, involuntary, and unalterable markers of our identity. Nor is it hard to guess the likely effect on social cohesion when our institutions echo the view that we are not individuals, but are rather embedded within a system of interlocking group identities

Even though he is criticising the left here, his comments reveal the depth of his opposition to any traditional national identity. A love of one's people is, in his view, merely an expression of "our stone age brains" rather than, as was traditionally thought, a nobler expression of a man's character. Again, he uses liberal terminology in opposing traditional identity, complaining that it is "involuntary" and "unalterable".

Lynch also worries that politics has become overly partisan, becoming another form of tribalism. He consoles himself with the thought that being Democrat or Republican is something that can be cast off:

At the end of the day, however, Republicans and Democrats are able to take a break from these suffocating identities and get to put on their dentist, mom, Patriots fan, or “I love birding” hats.

This too is interesting in revealing Lynch's permissible identities. Of the four listed, three are predictably "voluntarist": your profession, your sports team, your hobby. Again, it's difficult to see these as a basis for larger social commitments (are you really going to make sacrifices for the greater good because you identify as a bird watcher?). It's interesting, however, that he accepts the identity of "mom" as this rests on an unalterable sex characteristic - if he were entirely consistent in his politics he should probably include this as one of his "suffocating identities".

In the very next paragraph Lynch returns to his condemnation of identities that, unlike the political ones, are unalterable aspects of self:

Contrast this with how our tribal impulses are triggered by the outwardly visible markers of group membership that are branded to our skin or etched into our sexual characteristics. These identities are like inescapable castes into which we are born. Not only do we exercise no choice over our membership, our affiliation is stamped on our face and imprinted in DNA sequences. Unlike groups assembled around freely chosen common interests, we can identify these people on sight. We can start with the business of hating them without ever having to engage in the unpleasant task of actually talking to them, getting to know them a little, and possibly even recognizing their humanity.

I would like you to take note, once more, of just how intransigent this all is. There is a vast gulf here between traditionalism and right-liberalism - we do not share a common politics. For Lynch, any identity or form of commonality that is etched into us becomes a violation of the principle of "voluntarism" and is regarded as as aspect of hatred and inhumanity (is it not just as likely that qualities that are etched into us, such as our sex, are foundational to our self?).

I made the point previously that patriotism was once associated not with, as Lynch puts it, "the nastiest impulses natural selection has to offer" but with the higher, nobler faculties of man. In 1805, Sir Walter Scott made this point in verse form, asserting that a man with a living soul would love, and identify with, his own people and place:

Breathes there the man, with soul so dead,
Who never to himself hath said,
This is my own, my native land!
Whose heart hath ne’er within him burn’d,
As home his footsteps he hath turn’d,
From wandering on a foreign strand!
If such there breathe, go, mark him well;
For him no Minstrel raptures swell;
High though his titles, proud his name,
Boundless his wealth as wish can claim;
Despite those titles, power, and pelf,
The wretch, concentred all in self,
Living, shall forfeit fair renown,
And, doubly dying, shall go down
To the vile dust, from whence he sprung,
Unwept, unhonour’d, and unsung.