This one is particularly for Australian readers. A new publishing house, Bonfire Books, specialising in Australian historic authors has released its first title, Selected Tales of Price Warung. 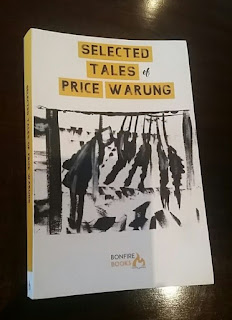 Price Warung was the pen name of William Astley (1855 - 1911). He is considered to be one of the best writers of Australian short stories. Professor Edward Watts of Michigan State University thought that the themes he addressed were similar to those of his contemporaries, Joseph Conrad and Thomas Hardy.

You can read more about the book at the publisher's website (here), including purchase information (for yourself or maybe a Christmas present for any avid readers you know).

Below is a promotional video from the publisher's YouTube channel:

I have finished reading a book called The Elizabethan World Picture by E.M.W. Tillyard. It sets out clearly the cosmology of the Elizabethans - their understanding of the structure of the cosmos we inhabit - and argues that this was a continuation of the same understanding held in the Middle Ages and, in parts anyway, going right back to the Ancient Greeks.

This longstanding cosmology was already being challenged in Elizabethan times by developments in science and as the modern period developed it became untenable. I think it's important to consider how the loss of this older understanding affected the development of Western thought.

So what was this cosmology? First, the "vertical structure" was immensely emphasised. All created things existed in a rank from the most base to the most noble: there was an order to existence from lowest to highest, with an intricate order of "degrees" of existence. This was the "great chain of being" with every aspect of creation being linked to one above it and one below it, with no gaps in the chain. For the whole to function, the links could not be broken, therefore there was an abundance of life in which nothing was superfluous.

The vertical structure was reflected in the architecture of the universe. The sublunary sphere (i.e. below the moon) was the lowest sphere, in which things were mutable and subject to decay. Above the moon were the celestial spheres, a realm made up of pure aether, with a planet embedded in each revolving sphere. Beyond this was the firmament, the sphere of fixed stars, and then beyond this the primum mobile, the outermost moving sphere. Outside all this was the Empyrean, the dwelling place of God.

There was an ascending hierarchy of angels, each associated with one of the spheres. As for man, he had the dignity of bridging the chasm between spirit and matter - a key position in creation and one that gave man a mixed constitution. Man was separated from the beasts by the gift of reason, which was made up of understanding and will. These were corrupted by the Fall, but man nonetheless had the freedom to act according to his higher or lower qualities, i.e. nobly or basely.

When you read about the cosmology you have a sense that it must have been enchanting to have beheld the world this way. At the same time, its loss was necessarily disenchanting. The poet John Donne wrote in 1611 of the impact of the new sciences:

And new philosophy calls all in doubt,
The element of fire is quite put out,
The sun is lost, and th’ earth, and no man’s wit
Can well direct him where to look for it.
And freely men confess that this world’s spent,
When in the planets and the firmament
They seek so many new; they see that this
Is crumbled out again to his atomies.
‘Tis all in pieces, all coherence gone,
All just supply, and all relation;
Prince, subject, father, son, are things forgot,
For every man alone thinks he hath got
To be a phoenix, and that then can be
None of that kind, of which he is, but he.

There is a direct link made here between changes in the cosmology, and a loss not only of coherence but of "relation", including that between people (prince & subject, father & son).

I have quoted these lines from Shelley often, but will do so again as they would not have been possible in the older cosmology:

The loathsome mask has fallen, the man remains/ Sceptreless, free, uncircumscribed, but man/ Equal, unclassed, tribeless, and nationless,/ Exempt from awe, worship, degree, the king/ Over himself

This was Shelley's ideal of the "New Man" in 1820. It is interesting that Shelley should describe the new man as being "exempt from degree" - directly opposing the vertical structure of the old cosmology. In line with Donne's observations, Shelley's new man is also to be "unclassed" - to not belong to any "kind" of thing which might give form or relation to it. Shelley, it should be remembered, fiercely rejected what he called "detestable distinctions" such as those between men and women.

We now have something remarkably different from the older understanding. Instead of a vertically oriented chain of being we now have a horizontally ordered floating particle society. Instead of an orientation to the noble over the base, we do not distinguish between Thomas Tallis and Cardi B.

And reason has lost its moorings. I am not sure that the Elizabethan understanding of reason was without its flaws, but at least there were limits placed upon the idea of individual reason as an ordering principle of society. Not only were human will and understanding thought to be corrupted, man had a given form and place within the cosmos.

Angela Nagle: attacking globalism from the other side

It might surprise some people to learn that there are leftists who are against open borders. Angela Nagle, an Irish academic and writer, is one such person. It's interesting to read her criticisms of globalism, as they reinforce the arguments that we ourselves make.

In 2018 Nagel wrote a piece for American Affairs titled "The Leftist Case Against Open Borders". She observed of the modern left that,

Today’s well-intentioned activists have become the useful idiots of big business. With their adoption of “open borders” advocacy—and a fierce moral absolutism that regards any limit to migration as an unspeakable evil—any criticism of the exploitative system of mass migration is effectively dismissed as blasphemy. Even solidly leftist politicians, like Bernie Sanders in the United States and Jeremy Corbyn in the United Kingdom, are accused of “nativism” by critics if they recognize the legitimacy of borders or migration restriction at any point. This open borders radicalism ultimately benefits the elites within the most powerful countries in the world, further disempowers organized labor, robs the developing world of desperately needed professionals, and turns workers against workers.

She points out that,

Developing countries are struggling to retain their skilled and professional citizens, often trained at great public cost, because the largest and wealthiest economies that dominate the global market have the wealth to snap them up...According to Foreign Policy magazine, “There are more Ethiopian physicians practicing in Chicago today than in all of Ethiopia, a country of 80 million.”

In a piece about her own country, Will Ireland Survive the Woke Wave?, Nagle predicts that Ireland will follow the same path as other Western nations:

As a former colony, historically unsullied by the sins of slavery and imperialism, Ireland’s national identity has been largely free of the culture of pathological self-hatred found across most of the liberal West today...But all of that is about to change.

She believes that Ireland is too economically dependent on an international "progressive tech oligarchy" and that,

It will now be a second but no less bitter irony that the native Irish working class will soon find themselves in the same position as the British have — despised as reactionary by our own elites and morally and economically blackmailed into accepting their more enlightened values.

Like all doomed traditions, our banal ethno-nationalism has been passively held by the majority while the intellectual and moral foundations that once justified it have been slowly replaced and degraded while nobody was paying attention. When a full confrontation with the liberal internationalism we invited in during the Celtic Tiger years inevitably happens, those foundations will already be gone and we will no longer be able to explain why having any right to a national culture or national sovereignty is anything other than racist and exclusionary.