It's not just the left

If you oppose open borders, you can't just identify the left as the problem. There is an influential part of the political right which also adopts this policy. Take Sam Bowman as an example. He is a Senior Fellow at the Adam Smith Institute and describes himself as a neoliberal. His mindset is what you'd expect from someone whose intellectual formation took place in a university economics/commerce department.

Bowman tweeted that he favours huge amounts of immigration of unskilled workers into Britain even if it reduces the welfare of his countrymen, for instance, through higher rates of crime. 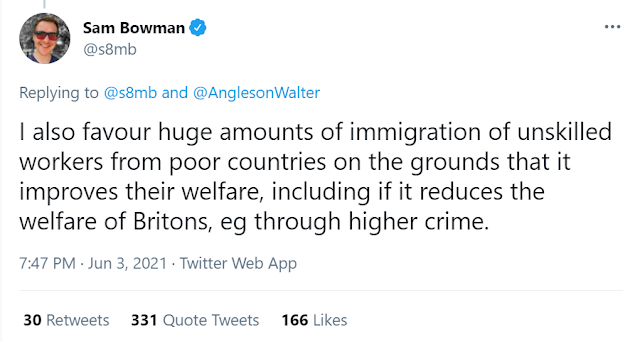 He advocates this despite describing himself as a selfish person in his personal behaviour: 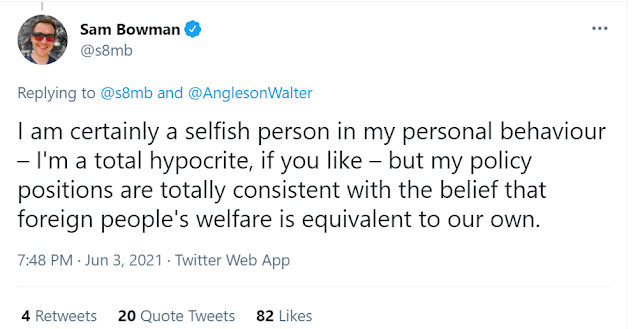 This is a utilitarian approach to morality, in which it is thought that something is moral if it produces the greatest good for the greatest number. Bowman is arguing that the good for the immigrants would outweigh the evil for the natives and therefore the policy would be moral.

It is a mechanical, calculative approach to morality in which it is assumed that the good is the pursuit of material self-interest in the market. Most of the replies to Bowman quite rightly reflect a different view of the human person, as valuing natural forms of relationships that generate particular duties and loyalties. Many of these replies accused Bowman of being a traitor for urging that the welfare of his own countrymen be sacrificed.

It was also suggested by many of Bowman's critics that he was flaunting his upper-class status in his tweet. A wealthy person would be less likely to be adversely affected by the mass immigration of low-skilled workers. Bowman and his supporters responded by claiming that it was a good thing that the rich would be advantaged:

Bowman and friends believe that their own living standards will be improved by a mass of low-skilled, low wage immigrants, who can act as a kind of servant class to the wealthy. The mindset appears to be that if some native working class people are negatively affected, this is justified by the benefits to the upper classes and to the immigrants.

Although most people do not share Bowman's Economic Man approach to life, a great many influential people at the top do. If we want to create a better political class, we have to be just as critical of the right liberal types as we are of the left liberal ones.

(One final point. It is difficult to draw any viable notion of a common good from Bowman's politics. The basic idea of the common good is that the rulers of the UK should rule on behalf of all social classes rather than just their own. But if morality only considers the selfish individual and the entire mass of humanity, i.e. if these are the two parts of the equation, then it is likely that the welfare of one part of the community will be sacrificed, as Bowman advocates. In a sense there is no "polis" for a common good to be exercised within, when there is only me as a selfish individual and the whole of humanity as political and moral actors.)