I know some gay people well enough to keep up with their political views. They obsessively attack white men whilst at the same time supporting Islamic immigration. It has never seemed prudent to me - why seek to deconstruct the people who let you be and replace them with people who are likely to attack you?

So I was interested to see what their response would be to the massacre of gays in Orlando Florida by a Muslim man. It took a few hours for the following to appear: 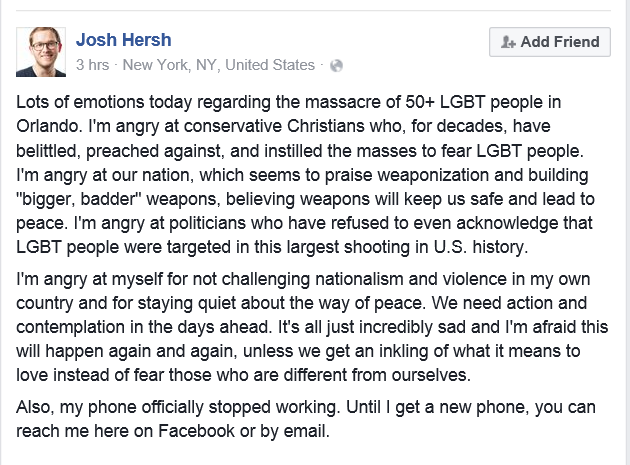 Instead of using reality to test his beliefs, he is simply doubling down on his belief system. He targets conservative Christians as the enemy, despite the shooter being a Muslim (and, it seems, a registered Democrat). He blames nationalism, despite the fact that it was an open borders internationalism that brought the shooter to Orlando. Finally, he claims that these attacks will continue to take place unless we go even further along the path of opening ourselves to those who wish us harm.

The left is not going to solve this, not even when reality slaps them hard in the face. They can be mugged by reality over and over and it will not change the grip that their political ideology has over them.
Posted by Mark Richardson at 12:07 pm