Preaching privilege one day, love and unity the next

Leftists can be more open about what they post to social media than those of us on the right. As I have quite a few leftist friends and relatives on my feed, I get to know what really interests them politically.

Generally, they are only interested in what happens in Australia and America. And their overwhelming interest lies with the idea of white male privilege. It is what I have come to call "shakedown politics". You spot something that white men have (e.g. greater representation on a board) and you roar mightily about white male privilege, because you see the chance to get something out of your activism (i.e. board places). But if 16 Yazidi women are brutally murdered by ISIS in the Middle East for refusing to become sex slaves, it doesn't even make it onto your radar.

What I noticed about leftist messaging in the run up to the Orlando massacre, was something like the following:

Clearly, there is a blind spot in leftist politics here. They don't see that the envy/rage/hatred towards white men (ressentiment?) runs counter to calls for love and unity.

The hostility toward white men seems, if anything, to be picking up steam. You have to wonder where it will end. To give just one example, you might be aware of the sad event that occurred at a Disney resort in Florida where a young boy was taken by an alligator. A prominent white feminist from Chicago (apparently a corporate lawyer) responded by tweeting the following: 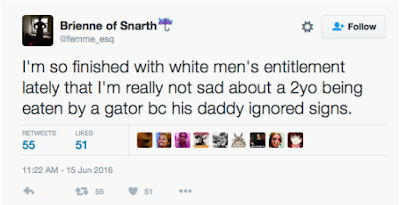 Not much love and unity on display in Brienne's comment.
Posted by Mark Richardson at 5:01 pm