Charles Darwin visited Australia as a young man in 1836. After his first day in Sydney he wrote: 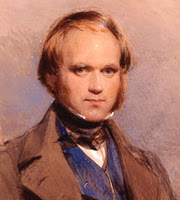 In the evening I walked through the town & returned full of admiration at the whole scene - It is a most magnificent testimony of the power of the British nation: here, in a less promising country, scores of years have effected many times over, more than centuries in South America. - My first feeling was to congratulate myself, that I was born an Englishman

I'm so unused to such a positive sense of identity from educated Anglos that this passage jumped out at me. Darwin observed that his own countrymen had in a few decades created a beautiful, well-ordered city in a difficult terrain - and he recognised the accomplishment.

Darwin also recorded his thoughts regarding the Aborigines. He was impressed with their hunting skills:

In their own arts they are admirable; a cap being fixed at 30 yards distance, they transfixed it with the spear ... In tracking animals & men they show a most wonderful sagacity.

However, he also observed that the Aborigines would not make use of opportunities to farm or to live a more settled life:

They will not however cultivate the ground, or even take the trouble of keeping flocks of sheep which have been offered them; or build houses & remain stationary

Nor did they give up their tribal warfare:

I should have mentioned that in addition to their state of independence of the Whites, the different tribes go to war. In an engagement which took place lately, the parties, very singularly, chose the centre of the village of Bathurst as the place of engagement; the conquered party took refuge in the Barracks

Darwin thought the numbers of Aborigines were declining:

The decrease in numbers must be owing to the drinking of Spirits, the European diseases, even the milder ones of which such as the Measles are very destructive, & the gradual extinction of the wild animals.

There's an interesting passage in the book in which Darwin expresses sympathy for families having to employ convict servants. He writes about the male convicts and then notes "The female servants are of course much worse". So perhaps the men of Darwin's generation did not thoughtlessly "white knight" all women as is sometimes claimed.

Although Darwin was unimpressed with certain aspects of the convict system, he nonetheless thought there was a positive larger outcome:

But as a means of making men outwardly honest - of converting vagabonds most useless in one hemisphere into active citizens of another, and thus giving birth to a new and splendid country - a grand centre of civilization - it has succeeded to a degree perhaps unparalleled in history.

Posted by Mark Richardson at 3:12 pm