When you read the philosophy of Thomas Hobbes you can't help but notice how well it fits with the mindset of some people today. There are Hobbesians among us.

In previous posts I have summarised the philosophy of Hobbes, as set out by Michael Allen Gillespie in his book The Theological Origins of Modernity. Here are some choice quotes from the book outlining Hobbes's ideas:

We are all only individual beings, determined by our idiosyncratic passions. Good and evil for each of us is thus measured not by our progress toward a rational, natural, or supernatural end but by the vector of our desire. No direction is naturally better than any other. Good is what pleases us, evil what displeases us, good what reinforces our motion, evil what hinders it.

For Hobbes reason means something different than what it did for his predecessors. It is not a separate power that can discern the appropriate ends of life and guide us in a proper direction. It is thus not teleological but instrumental, the spy and scout of the passions. It thus helps us to maximise the satisfaction of our desires but not to train, direct or control them.

Thus, while we all desire to exist, what any one of us wants to exist for or wants out of existence can only be specified by the individual. The happiness of each individual thus depends upon his getting what he wants, and this is related to his power...Such power is the basis for what Hobbes believes is rightly called freedom.

You can see here the logic of nominalism (that there are only individual instances of things) and a certain type of materialism (that we are just matter in motion) in undermining a "teleology" - a view that there are proper ends to human life that are discernible through reason.

What you have instead is a belief that it is the freedom to pursue my own idiosyncratic wants that matters. It does not matter so much what these wants are - one direction is neither better nor worse than another. The important thing is that I have the power to follow my desires without external interference.

The implications of all this become clearer when you see these ideas expressed in debate. For instance, I recently saw the following posted on social media:

Now, whether or not you completely agree with this assertion, note that this is not Hobbesian, as it suggests that women do have a "telos", a distinct end in life to fulfil. Predictably, this drew a horrified response from some readers, who shuddered at the thought that womanhood might be linked in a meaningful way to motherhood. I noted this in the thread: 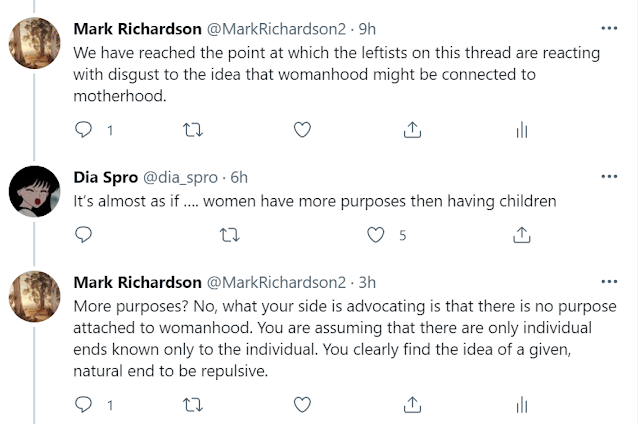 Now, perhaps you think that I was exaggerating in my last remark. But consider what follows when I enter into debate with a poster named Steven. 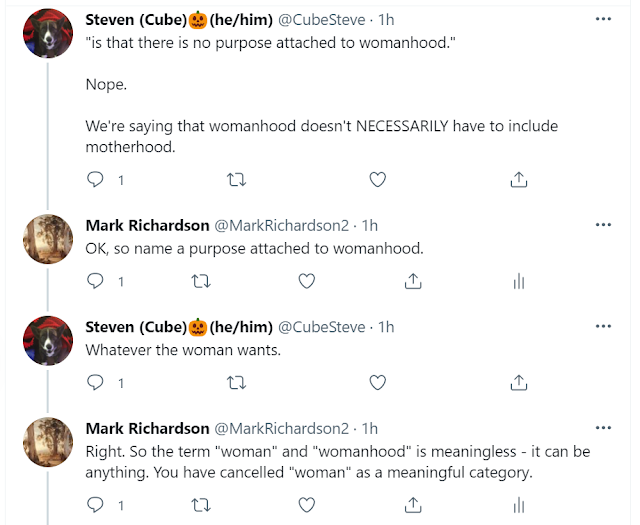 Steven is channelling Hobbes when he claims that the purpose attached to womanhood is "whatever the woman wants". The argument continued: 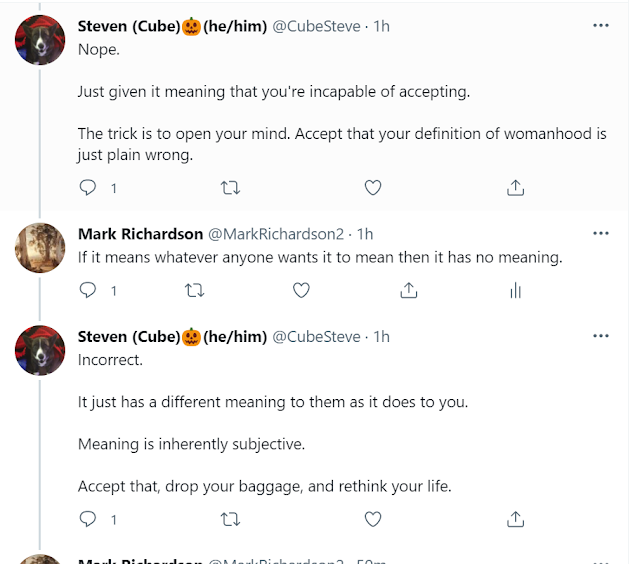 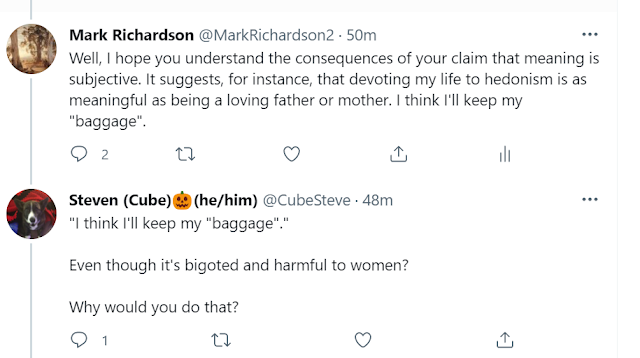 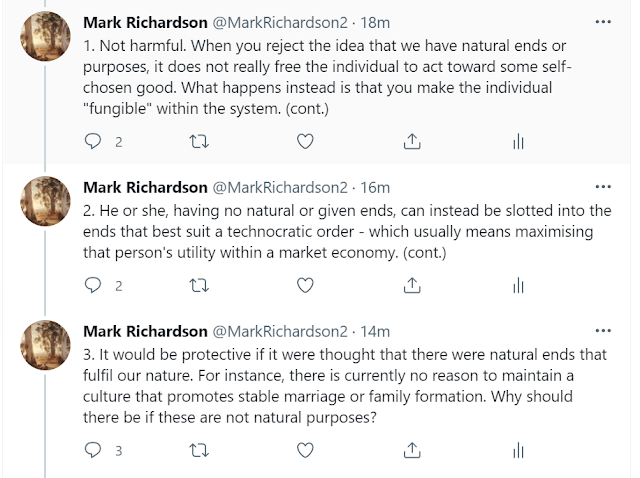 I've tried to explain in the comments above that in practice denying that we have natural ends in life does not free the individual to do anything, but instead provides no limits to what is expected of the individual within a technocratic social order. Why would a society be organised to facilitate family formation, a culture of stable family relationships, and the fulfilment of a fatherhood and motherhood role, if none of these are rational, natural or supernatural ends of men and women?
The digging deeper into Hobbesian soil continued: 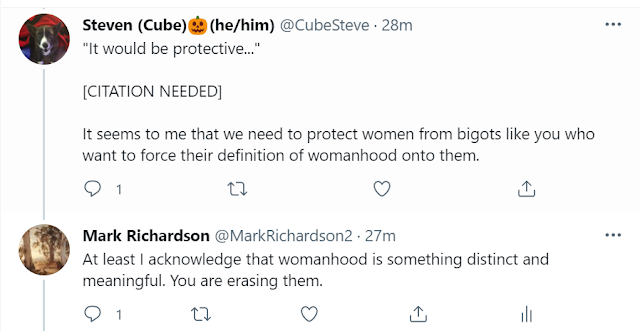 It was part of the Hobbesian philosophy that no direction is better than any other. And here we have a latter day Hobbesian claiming much the same thing: that hedonism is as meaningful a direction as responsible parenthood. 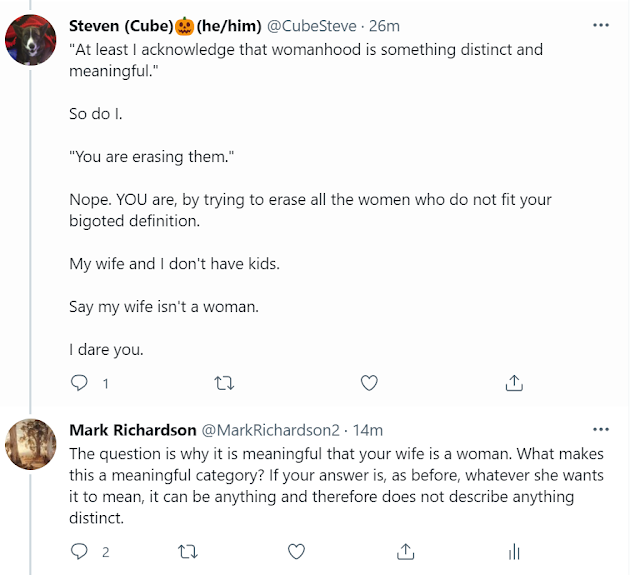 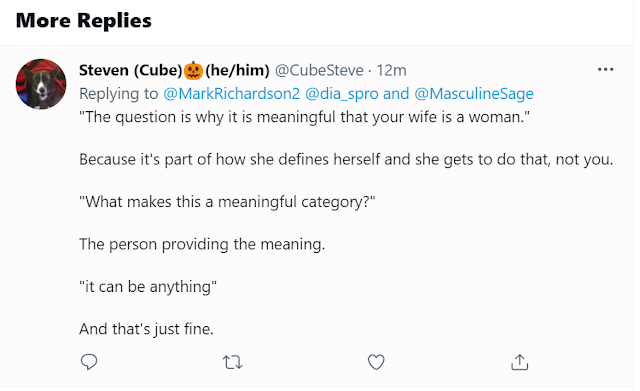 Steven is claiming here that the category of womanhood is meaningful because that is how some people define themselves and that it doesn't matter what womanhood is actually thought to be. It could be made to be one thing or something entirely contradictory to that thing. There is no rational limit to how we can define anything, it is an arbitrary decision of the individual (who, in a sense, gets to act just like the God of nominalism).
(Note as well that Steven believes that it is either his wife who gets to define womanhood or else me doing it for her - the option that womanhood is a real thing that both of us can perceive is not part of his mental framework. This fits Hobbes's view that freedom is the power to have my own "motion" left unhindered by that of any other person.)
Steven then began to more aggressively defend his wife's status as a woman. I wondered why he would so vigorously defend a category which he had, to this point, reduced to a merely subjective and arbitrary choice: 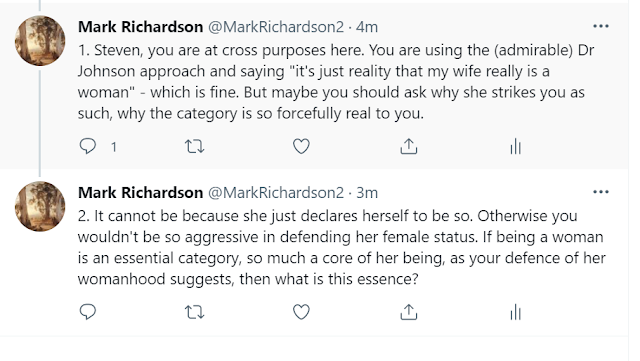 Steven chose not to budge from his radical Hobbesian/nominalist framework:

There is a lot to draw from this exchange, but I'll just briefly mention two things. First, Steven's position is a "dissolving" one. This too fits in with Hobbes's philosophy, in particular with his scornful rejection of "quiddity" - the inherent essence or nature of people or things. Second, we have to be open to the possibility that the philosophical foundations of the modern West are part of the problem we face today. In other words, the problem is not just that one political leader, or party, or movement has put things off course, but rather that there are some philosophical assumptions that became prominent in the early modern period that need to be rethought.
Posted by Mark Richardson at 11:47 pm