Hobbes & the ends of man

Politics has been quieter than usual since the American election, but I'm pleased to note that the questioning of liberalism continues to grow. Here is a recent example: 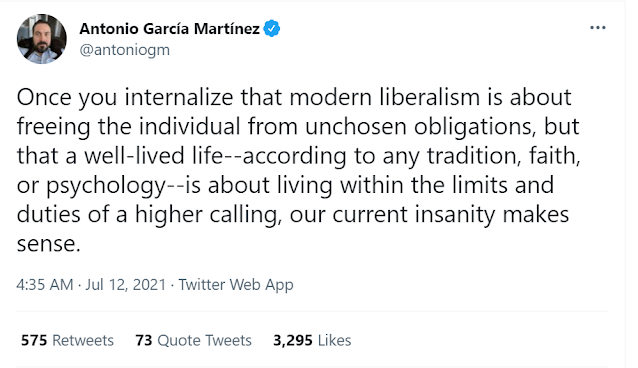 The responses to the tweet were mixed, but most recognised that liberalism had reached a point of crisis. One person, though, defended liberalism on the following basis: 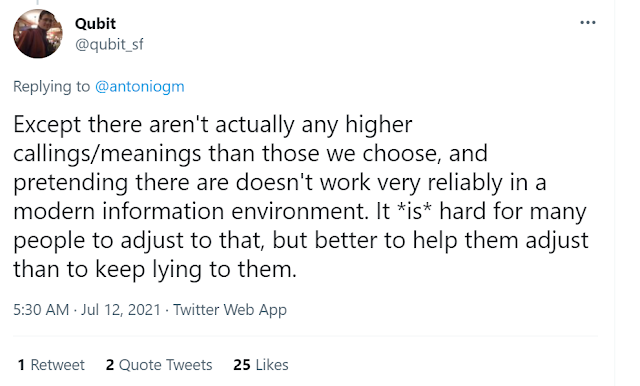 I checked this person's feed and he is a reasonably open-minded right-liberal type. What I would like to focus on is his claim that there is no higher meaning outside of the choices we make.

It brought to mind my recent reading on the philosophy of Thomas Hobbes. Hobbes radically diminished the meaning of human life. He thought that everything was merely matter in motion, so that humans were acted on in ways that activated our passions and so freedom and happiness meant having the power to pursue our own idiosyncratic passions without external constraint.

What this means is that humans do not have free will. To be autonomous or self-determining has a truncated meaning in this philosophy. Our actions are not really determined by ourselves, but by the actions of external bodies upon us. We are "self-determining" only in the sense that it is our own passions that we follow without hindrance, rather than someone else's.

Hobbes scorned the medieval philosophers, particularly those who discussed "quiddity" - the inherent nature or essence of someone or something. This is important, I think, in discussing whether there is a higher meaning to things. In the twitter thread, a lot of commenters acknowledged that the liberal principle was destroying society, but they thought that religion had too weak a hold to be able to provide a counteracting principle.

Even though I am religious myself, this attitude surprises me. After all, if you can accept "quiddity" then at the very least, even without being religious, you ought to be able to accept that creatures have natural ends, i.e. that they will seek to fulfil or bring to fruition their inherent nature. For instance, men will seek to develop masculine qualities and to fulfil masculine roles, women the same for the feminine. As we are social creatures, this then has implications for our commitments within a society, including upholding certain social norms that allow our nature to successfully unfold.

The problem is that Hobbes's philosophy does not even allow for such natural ends, let alone supernatural ones. Michael Allen Gillespie, in his book The Theological Origins of Modernity, describes Hobbes's view of ends this way:

We are neither superhuman nor depraved. We are all only individual beings, determined by our idiosyncratic passions. Good and evil for each of us is thus measured not by our progress toward a rational, natural, or supernatural end but by the vector of our desire. No direction is naturally better than any other. Good is what pleases us, evil what displeases us, good what reinforces our motion, evil what hinders it. Or to put the matter in different terms, good is an increase in our power and evil its decrease...Each person in Hobbes' view is thus a self-interested individual who seeks to maximise his own power and satisfaction.

I suspect the problem here is that once a Hobbesian view sinks into political thought, there is an acute sensitivity to the idea that any restraint or self-limitation is not a rational one designed to help us, as social creatures, unfold our own ideal nature but is instead a power play by which one group of people seek to block our own "vector of desire" in order to more readily follow their own. In other words, an appeal to natural ends will be rejected as an attempt to exploit or oppress, because that assumption is built into the framework of a Hobbesian philosophy.

So you cannot then simply argue against one aspect of a Hobbesian view - it needs to be more generally dismantled in order for a different politics to emerge. This is possibly the kind of thing Antonio Garcia Martinez is referring to in his first thesis here: 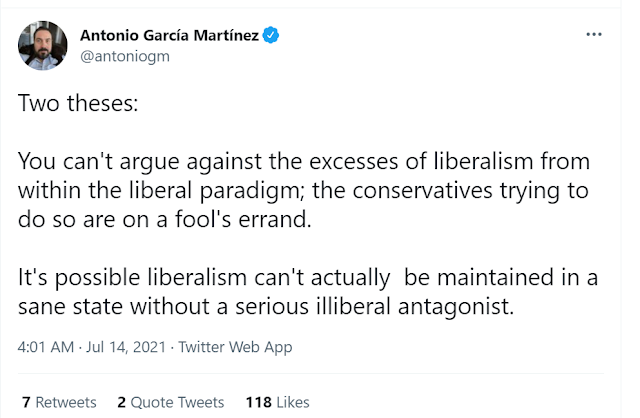 Posted by Mark Richardson at 12:32 pm