Hobbes & the metaphysics of modernity 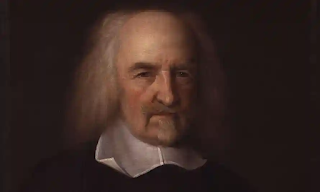 It is commonly assumed that modern politics - secular & liberal - is not based on metaphysics. From this is derived the belief that we should keep metaphysics out of politics, particularly metaphysics of the Christian variety. For some Australians, for instance, it is troubling that our PM is a member of a Baptist church.

The dictionary definition of metaphysics is as follows:

a division of philosophy that is concerned with the fundamental nature of reality and being and that includes ontology, cosmology, and often epistemology

What is obvious from this definition is that all politics, including those of liberal modernity, must be based on a set of metaphysical assumptions. What matters then is not the impossible aim of excluding metaphysics, but trying to get the metaphysics broadly right, so that a human community is not thrown off course.

I have recently read Michael Allen Gillespie's The Theological Origins of Modernity. One of his arguments is that liberalism is based not so much on a rejection of Christian metaphysics, but developed from the theological debates that took place in the West following the adoption of a nominalist world view from the fourteenth century onward.

Gillespie sees Descartes and Hobbes as being two key proto-liberal thinkers. In order to demonstrate the metaphysical assumptions involved in the development of liberal thought, I'd like to focus on Gillespie's treatment of Hobbes. I think it is clear from his explanation of Hobbes's thought, that Hobbes was not operating neutrally from within a metaphysical vacuum, but rather that the edifice of Hobbes's thought was built upon a series of metaphysical assumptions about the nature of the cosmos; a theory of knowledge; the nature and purposes of man; the relationship between God and man and so on.

Gillespie begins with an account of Hobbes's physics. As interesting as this is, for the purposes of brevity I am going to skip it and focus on one aspect only of Hobbes's thought, namely his anthropology. There is enough in this alone to demonstrate the metaphysical commitments of the early modern philosophers.

It was Hobbes's view that men are "complex automata". As such, we do not have free will. Instead, we are moved by our passions (which are aroused by the impact of external objects on our bodies). If we have no free will then we cannot strive for moral perfection. Instead, our happiness depends on satisfying our bodily desires.

What are these desires? Only the most rudimentary desires, such as seeking to preserve our own lives, are basic to men. As a nominalist, Hobbes was committed to the idea that we are radically individualistic beings with idiosyncratic passions. To quote Gillespie "Thus, while we all desire to exist, what any one of us wants to exist for or wants out of existence can only be specified by the individual. The happiness of each individual thus depends upon his getting what he wants, and this is related to his power...Such power is the basis for what Hobbes believes is rightly called freedom".

You can see already how the underlying philosophy colours the meaning of terms like "freedom". With Hobbes the concept of freedom is stood on its head. We are free, according to previous ways of thinking, when we are not slaves to our passions. With Hobbes, we are free when there is nothing to impede our passions. As Gillespie puts it:

There is no freedom God bestows on us with an infusion of his will. Hobbes believes such pious hopes merely subordinate us to the passions of priests and religious fanatics. Humans are bodies driven by passions, and to be free for Hobbes is to pursue the objects of our passions without external constraints. This is practical but not metaphysical freedom...While we are thus predestined to be the kinds of beings we are and to have the passions that we have, this does not affect our freedom because it is precisely these passions that define our identity.

You can see how this overlaps with modernist thought. Moderns tend to identify freedom with an absence of external constraints; they tend to define their identity around their idiosyncratic passions; and in the English speaking tradition there has long been a hypersensitivity to the idea of priests representing an external tyranny. What is different, perhaps, is that moderns tend to combine, in an unprincipled way, the voluntarist idea that we create who we are as an act of our own will with a materialist and determinist view of the cosmos.

For Hobbes the next step is to emphasise the significance of power in being able to pursue our desires unimpeded:

The degree of our freedom depends on our power...Our power depends on the strength of our bodies, the number of our supporters, the extent of our external resources, and above all on our capacity to reason. For Hobbes reason means something different than what it did for his predecessors. It is not a separate power that can discern the appropriate ends of life and guide us in a proper direction. It is thus not teleological but instrumental, the spy and scout of the passions. It thus helps us to maximise the satisfaction of our desires but not to train, direct or control them. To live by right reason, for Hobbes, is thus not an end but a means. Indeed, the purpose of deliberation is not to moderate the passions, as Petrarch believed, but to increase our power to get what we want.

This too is recognisably modern. You see it when women defend the unconstrained display of sexuality as empowerment. Note too the way that concepts like "reason" so readily change their meaning when placed within a different metaphysics.

The unfolding of Hobbes's thought leads to a particular take on what the ends of human life are:

We are neither superhuman nor depraved. We are all only individual beings, determined by our idiosyncratic passions. Good and evil for each of us is thus measured not by our progress toward a rational, natural, or supernatural end but by the vector or our desire. No direction is naturally better than any other. Good is what pleases us, evil what displeases us, good what reinforces our motion, evil what hinders it. Or to put the matter in different terms, good is an increase in our power and evil its decrease...Each person in Hobbes' view is thus a self-interested individual who seeks to maximise his own power and satisfaction.

It is interesting how enduring this view of man has been. In the later twentieth century, for instance, both the left and the right of politics adopted a game theory which required individuals to act in a self-interested way, just like Hobbesian man might be expected to act.

What does it mean to envisage a society made up of millions of idiosyncratically individual actors, each attempting to further his own power so that he has the means to satisfy his desires? First, given that our needs are limitless, there is an impetus to master/conquer nature to provide the resources to satisfy these unlimited wants, thereby providing conditions that might provide security. Second, in a state of nature, men will compete for finite resources; the natural condition of man is therefore a war of all against all.

This is obviously not an exhaustive account of Hobbes's thought. I hope it has shown, though, not only that metaphysics matters, but that liberal modernity is undergirded by its own metaphysics. We live in a society that has been shaped over time by a metaphysics that has been in place for some centuries now.

The alternative does not need to be an attempt to base politics on the metaphysics of any one particular church and its theology. We do, however, need to "unconceal" the metaphysics on which modernity is based and challenge aspects of it. This includes its nominalism; its reductive anthropology; its reduction of authoritative knowledge to either an apodictic science or to whatever grants power/mastery over nature; and its generally base understanding of human ends/purposes.

Posted by Mark Richardson at 4:10 pm