What does it mean to be modern? (Part 1)

What does it mean to be modern? Michael Allen Gillespie, in his work The Theological Origins of Modernity, gives this answer:

...at its core, to think of oneself as modern is to define one's being in terms of time. This is remarkable. In previous ages and other places, people have defined themselves in terms of their land or place, their race or ethnic group, their traditions or their gods, but not explicitly in terms of time...To be modern means to be "new," to be an unprecedented event in the flow of time, a first beginning, something different than anything that has come before, a novel way of being in the world, ultimately not even a form of being but a form of becoming.

To understand oneself as new is also to understand oneself as self-originating, as free and creative in a radical sense, not merely as determined by a tradition or governed by fate or providence. To be modern is to be self-liberating and self-making, and thus not merely to be in a history or tradition but to make history. To be modern consequently means not merely to define one's being in terms of time but also to define time in terms of one's being, to understand time as the product of human freedom in interaction with the natural world. Being modern at its core is thus something titanic, something Promethean.

This description of modernity helps us to understand why people have such difficulty in breaking cleanly from the modernist project. This project is now something that we live within, and by its nature it has broken with the past as a living tradition, making it difficult to connect to any genuine alternative.

Gillespie goes on to trace the development of the concept of modernity. Modernism, in its current meaning, took some time to emerge. Those who wanted to challenge either the present or the recent past, often did so by looking back to antiquity rather than by embracing "modernity". Gillespie mentions the "quarrel of the ancients and the moderns" that took place in the seventeenth century. When I did some further reading on this I learned that in France the establishment literary figures who supported throne and altar were the ones who considered themselves "moderns". These writers attacked the more radical literary figures who looked back to antiquity. So there was not yet a progressivism in the form that we would recognise.

What is more recognisable are movements like the Italian Futurists of the early 1900s. Below is a sketch by the Italian architect Antonio Sant'Elia that was part of a series called "The New City" (1914). 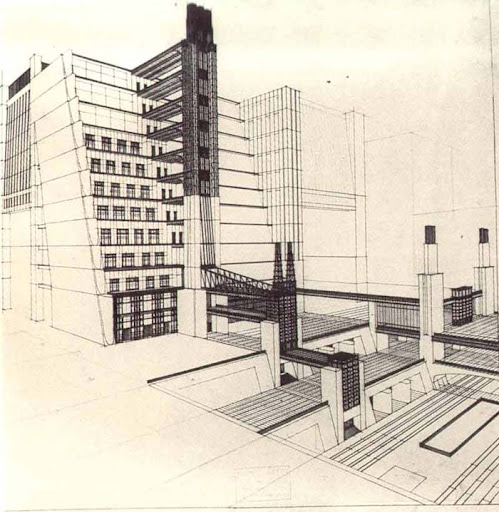 Sant'Elia's vision of the new city has been described as follows:

The city was a backdrop onto which the dynamism of Futurist life is projected. The city had replaced the landscape as the setting for the exciting modern life. Sant'Elia aimed to create a city as an efficient, fast-paced machine. He manipulates light and shape to emphasize the sculptural quality of his projects. Baroque curves and encrustations had been stripped away to reveal the essential lines of forms unprecedented from their simplicity. In the new city, every aspect of life was to be rationalized and centralized into one great powerhouse of energy. The city was not meant to last, and each subsequent generation was expected to build their own city rather than inheriting the architecture of the past.

The Italian Futurists were influential enough to have buildings approved by Mussolini, such as a new train station in Florence completed in 1934: 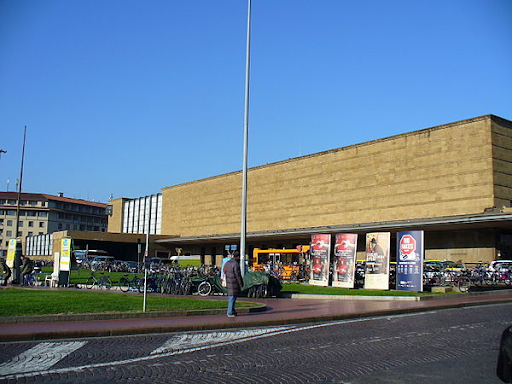 The heating plant and main controls cabin for this station are considered masterpieces of Futurist architecture (1929): 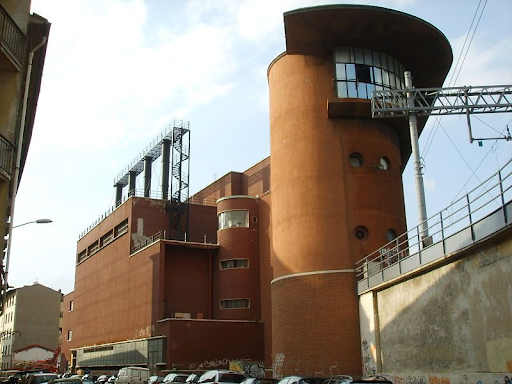 In Australia you can see modernism extending its influence among the elite in the interwar period. It was not uniformly so in the 1920s, though. Here is part of a speech given by Sir William Irvine, who at that time was the Chief Justice of the Supreme Court of Victoria. In opening a local high school in 1928 he said,

Such schools present the young with opportunities of rising not merely to technical and industrial efficiency, so that they may make more money or higher wages. That is a useful object and may be the aim of the majority who enter this and other schools but there is something higher.”

The more chances given to the rising generation in the way of education, says Sir William, the better for all concerned...It was the aim of education to bring the minds of people into paths of thought leading to vistas of intellectual truth and beauty. Secondary education should be a means of drawing out the creative intellect of the youth of this fair country, in order that their efforts would lead towards the benefit of all, so that their minds might be uplifted above the sordid cares of ordinary life, and so that they might enjoy the priceless heritage of English history.

Irvine is clearly not interested in the technological alone and he holds the heritage of his own people in high regard - and so is not entirely a modern. But in the 1930s there continued to develop a strongly technocratic spirit in Australia, and it dominated at the highest level politically in the 1940s. After WWII there still existed a pride in the past at the local level, with the formation of local historical societies, the writing of local and family history, the erection of monuments to honour pioneers and so on. But even this changed by the 1990s. By this time there was an intensely focused campaign, particularly in the schools, to reject the past as something oppressive, something that was not to be identified with.

By this point, it was no longer so easy to think of yourself as a bearer of a culture or of a tradition. This was a logical end point of the understanding of what it means to be modern as set out by Michael Allen Gillespie. If we define ourselves as self-originating, not tied to people or place, nor to history, then it is logical to cut our ties to the past and to our own tradition.

We are no longer culture bearers. That has deep implications that I'll discuss in the second part of this series.

Posted by Mark Richardson at 2:35 pm