There is no binary, coherent thing called “biological sex”.

The logic of liberalism is continuing to unfold. There is a strong assertion in this video from Teen Vogue that there are no male and female bodies, i.e. nothing about the body that would reasonably qualify a person as male or female.

Chase Strangio, an attorney for the ACLU, claims in the video that,


We all have characteristics that are typically male and typically female and it is really about political choices, social factors, ideological choices that we assign meaning to different parts of our body.


The body doesn't have just one place where we can sit there with a microscope or something else and say, hey wait a second, this is really who you are, this is your true sex. In fact, who you are is who you say you are.

One of the trans participants in the video asserts,


When I say I'm a woman I don't just mean that I identify as a woman, I mean that my biology is the biology of a woman regardless of whether or not doctors agree.


It was almost inevitable we'd arrive at this point. In a liberal society what matters is maximising individual autonomy, which means that anything which limits our ability to determine who we are or what we do is seen as a limitation which the individual needs to be liberated from.

We do not get to determine our biological sex. Liberalism's first response to this "problem" was to say, well, we'll make a person's sex not matter in life. There will be no "sexism', meaning no sphere in life and no social role pertaining to one sex and not the other. To achieve this, it was claimed that traditional sex roles were based only on "gender" and that gender was an oppressive social construct that could be deconstructed.

But this was inevitably only a first step, as it still left people with a biological sex that they did not choose for themselves. Being a man or a woman no longer meant as much socially, but I still didn't get to choose for myself which one I would be.

And so the next step is to make the idea of biological sex itself something that is chosen by individuals. Hence the claim by Chase Strangio that there is no objective meaning to being born with certain body parts; the meanings are socially constructed, through political and ideological choices or through social forces.

Teen Vogue chose an interesting week to make all these claims as it coincided with the public release of research showing that differences between the brains of boys and girls begins in the womb, and therefore before any possible social influences. Science continues to suggest that at least some differences between the sexes are hardwired rather than being created by culture and socialisation.

Finally, it should be pointed out that Teen Vogue is not alone in pressing forward with these sorts of claims. The Tasmanian Government has just decided to put forward legislation that would make abortions legal for men: 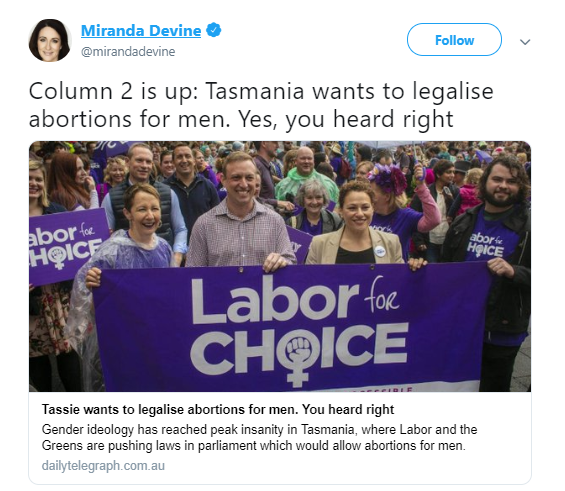 A note to Melbourne readers. If you are sympathetic to the ideas of this website, please visit the site of the Melbourne Traditionalists. It's important that traditionalists don't remain isolated from each other; our group provides a great opportunity for traditionalists to meet up and connect. Details at the website.
Posted by Mark Richardson at 11:29 am