Cardinal Robert Sarah: You must not sacrifice your national identities 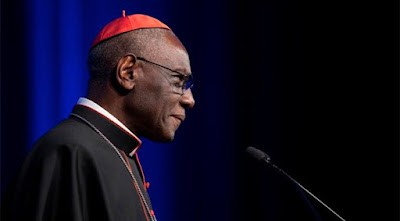 Cardinal Robert Sarah is one of those outstanding men leading the resistance to liberal modernity. He gave an interview recently; the following excerpt focuses on the issue of identity.


You also write that the modern world destroys by attacking [national and religious] identities. You, on the contrary, defend this rootedness that Simone Weil described as the first need of the human soul. That makes you a somewhat isolated voice in a Church that sometimes seems to have become a mere auxiliary of the pro-immigration party.

When I went to Poland [in October 2017], a country that is often criticized, I encouraged the faithful to affirm their identity as they have done for centuries. My message was simple: you are first Poles, Catholics, and only then Europeans. You must not sacrifice these first two identities on the altar of a technocratic Europe that acknowledges no fatherland. The Brussels Commission thinks only of constructing a free market in the service of the major financial powers. The European Union no longer protects the peoples [within it]. It protects the banks. I wanted to restate for Poland its unique mission in God’s plan. She is free to tell Europe that everyone was created by God to be put in a precise place, with its culture, its traditions and its history. This current desire to globalize the world by getting rid of nations with their specific characteristics is sheer madness. The Jewish people had to go into exile, but God brought them back to their country. Christ had to flee from Herod into Egypt, but he returned to his country upon the death of Herod. Everyone must live in his country. Like a tree, each one has his soil, his milieu where he flourishes perfectly. It is better to help people to flourish in their culture than to encourage them to come to a Europe that is completely decadent. It is false exegesis to use the Word of God to improve the image of migration. God never intended these rifts.


A note to Melbourne readers. If you are sympathetic to the ideas of this website, please visit the site of the Melbourne Traditionalists. It's important that traditionalists don't remain isolated from each other; our group provides a great opportunity for traditionalists to meet up and connect. Details at the website.
Posted by Mark Richardson at 10:23 pm