I always enjoy being able to post positive news. Last month provincial elections were held in the Netherlands. These elections are significant as they determine the seats held in the Dutch senate.

A new party called Forum for Democracy (in Dutch "Forum voor Democratie" or FvD), led by Thierry Baudet, made great gains, becoming the largest party in the senate with 13 seats (out of 75). The party led by Geert Wilders (Partij voor de Vrijheid or PVV) won 5 seats, giving the two nationalist parties 24% of the total. 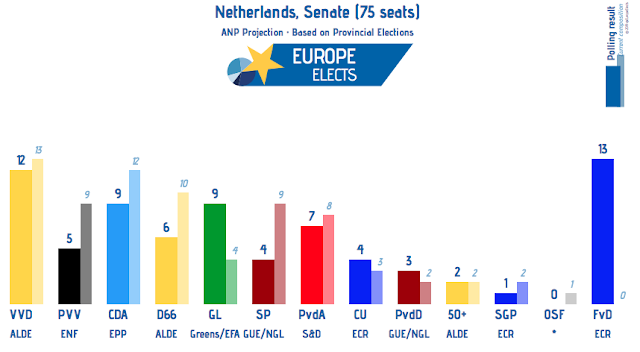 I can't say how much the politics of either of the parties genuinely agrees with traditionalism, as I'm not familiar enough with Dutch politics. What I do know is that Geert Wilders tends to appeal more to working-class people and that he does not focus on building party membership but relies on his own media exposure. I do like the advert that he produced for the election:

This seems to me typical of Wilders, in the sense that there is an eloquent appeal to a national spirit, but also that there is still sometimes a liberal frame of reference (as in "we have the freedom to decide for ourselves how we want to live" which works in the context of the video by asserting national sovereignty, but which if taken individually can dissolve the cultural and social forms of a community on the grounds of individual autonomy).

And what of Thierry Baudet? His party is said to appeal to younger people and to the middle-classes. He is an intellectual, having written several books, including one titled "Oikophobia: Fear of one's own". He is a Eurosceptic who wishes to limit immigration. He told supporters in his victory speech:


We stand here in the rubble of what was once the most beautiful civilisation.

We won because the country needs us. We are being destroyed by the people who are supposed to be protecting us.

Successive Rutte governments have left our borders wide open, letting in hundreds of thousands of people with cultures completely different to ours.


He is said to be especially opposed to the cultural self-loathing of the Dutch establishment.

One final point. It is particularly heartening that both parties are attempting to counteract what Patrick Deneen in his book Why Liberalism Failed calls "fractured time". It's a brilliant part of Deneen's book (pages 72 to 77 if you have the hardcover). Deneen argues that a core aspect of liberalism is its "presentism" - its dislocation of the individual from both the past and the future. It seems clear to me that this process has gone so far in the Netherlands that both Baudet and Wilders are making it central to their campaigns, by reconnecting people in a positive way to the past and by insisting that this can extend into the future as well.
Posted by Mark Richardson at 1:46 pm