This is from a book being used at American kindergartens: 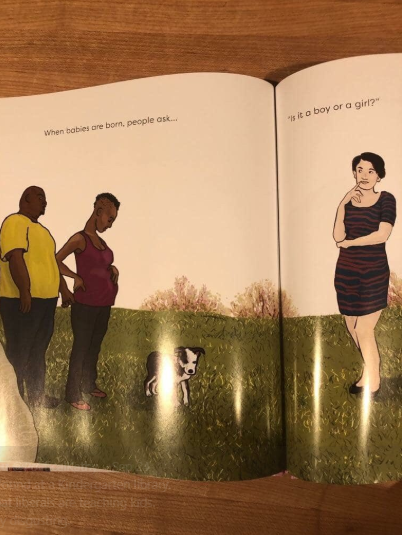 The text reads: When babies are born people ask "Is it a boy or a girl?" 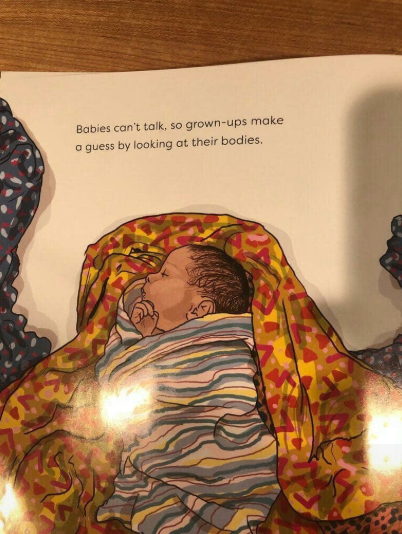 The idea here is that our bodies don't tell us whether we are male or female; our sex is something now cut off from our physical self, they are two different things. At best you can make a guess whether someone is male or female from looking at their body.

If we were to accept this, then the body would no longer hold the same depth of meaning as it does now. If a man looks at his body, at how he is built physically, he can read there some of his telos - of what he is supposed to develop toward in his whole person.

There is a French group, Vigi Gender, which seeks to uphold the more traditional view about our bodies being sexed. In their manifesto they write:

Become what you are

Man is an incarnate being endowed with a mind capable of reason and will. Our body is a source of meaning; it expresses the person, "my body is me." To deny the body, to deny the influence of the sexed body on behaviour, interests, psychology, skills, not only contradicts numerous scientific studies, but is to deny that the human person is an embodied being and to make of it a pure spirit, a being which only defines itself.

We are born male or female and all our life we fulfil ourselves as man or woman, we become what we are in completing what we received at birth (nature), and by what we receive throughout our lives through culture (relationship to the father and the mother, education, history, language, customs ...)


The next page of the kindergarten book has this: 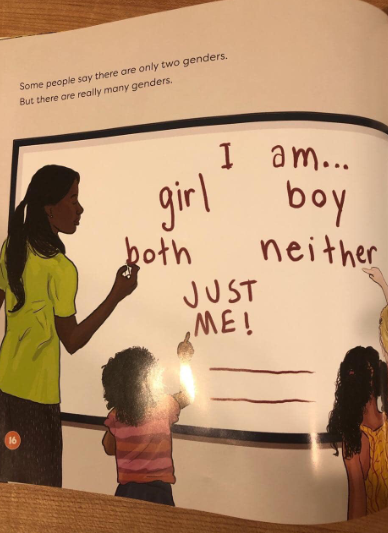 This is the page that fits most readily into the beliefs of liberal modernity. It suggests that I am truly myself when I am no particular ready made sexual category. Being "just me" means being both a girl and a boy, or neither, or perhaps one of countless boutique sexes, making me a uniquely sexed creature.

Liberalism tends to see our sex negatively as a potential fetter on our autonomous self. Being born either male or female is something predetermined, and therefore potentially limiting to the liberal, autonomous self. These categories therefore have to be made not to matter.

And so the kindergarten book sets "being me" against being either male or female. The two things are set apart rather than being interwoven. The book also promotes the idea that there are any number of possible sexual identities, making this aspect of the self more amenable to a liberal "self-expressive individualism".

Pope Benedict (as Cardinal Ratzinger in 1997) observed this larger trend within liberal modernity, describing it this way:


The idea that 'nature' has something to say is no longer admissible; man is to have the liberty to remodel himself at will. He is to be free from all of the prior givens of his essence. He makes of himself what he wants, and only in this way is he really 'free and liberated'. Behind this approach is a rebellion on man's part against the limits that he has as a biological being. In the end, it is a revolt against our creatureliness. Man is to be his own creator - a modern, new edition of the immemorial attempt to be God, to be like God.


It is not a step up in our dignity as humans to be denatured in this way. The liberal understanding is that I am "just me" either as a desexed personality or as a uniquely sexed one. And so there is no essence that exists as part of the created order that I share in and that gives substance and signficance to who I am and that gives a coherent unity that integrates - gives integrity to -  mind, body and soul.

Our limits as a biological being are also how we are concretely "natured". It is within this given, created nature that the deeper aspects of our self are to be experienced, not within what we make up ourselves as an "expressive choice".

In other words, we will find more, and be more, if we fully develop the masculine essence given to us as men, than if we assert, as an act of choice, our independence from this, either as a desexed personality or as a personality with a self-created sex, one that fails to connect our physical being and sexual being, body and mind.

A note to Melbourne readers. If you are sympathetic to the ideas of this website, please visit the site of the Melbourne Traditionalists. It's important that traditionalists don't remain isolated from each other; our group provides a great opportunity for traditionalists to meet up and connect. Details at the website.
Posted by Mark Richardson at 5:53 pm