Has the left resisted market values?

Liberalism as a political ideology has had a deep effect on Western society. But so too has the way that our society is organised economically.

What matters in a market economy is the individual as a producer and a consumer. Given that our society is organised around this "economic mode" there is a pressure on individuals to fit in with this imperative to maximise both individual production and consumption.

I think it's fair to say that for many people the measure of success in life is based on earning and consuming: more specifically on career status and income. And the basic orientation of many urban dwellers is on a consumer lifestyle of shopping, dining out, travel and entertainment.

It has reached the point that not much else is thought to matter, except perhaps a commitment to liberal political values which are thought to provide the "moral" aspect of life (and family still holds some ground).

In theory, the left is supposed to be a point of resistance to this dominance of market values. But, apart from a preference for working within the public sector, I can't see that this is true. The leftists I know have bought completely into the idea that success in life is measured by career status, money and a consumer lifestyle.

This helps to explain, for instance, the focus of modern day feminism. Western feminists use gender politics as leverage in the competition for upper middle-class employment. This is almost entirely what holds their attention.

It leads to the odd situation in which highly privileged feminists, promoted to positions of great influence with corresponding incomes and lifestyle trappings, nonetheless continue to portray themselves as belonging to an oppressed, disadvantaged class.

And what about traditionalists? We have to take the task of keeping the market in its place much more seriously. We ideally want to create a culture in which the purposes of man are much wider and more varied than simply earning and consuming. We want a culture which upholds communal identities based on family and ethny; which deeply connects the individual to people and place; in which men participate meaningfully in the polis; in which commitments to family and especially to motherhood and fatherhood can flourish; in which the spiritual nature of man can be nurtured; and in which an appreciation of the arts can be widely developed.

If there is no resistance to the mode of "earn/consume" then much else follows. For instance, if 20-something women are guided into a way of life in which the idea is to push toward maximum work commitments and productivity combined with the "glamour" of a high spending consumer lifestyle of dining out and travel, then the prospect of children can be rejected as one burden too many, as well as an unwelcome lifestyle impediment.

Just to show how far this mentality has already wormed its way into the culture, here is a poster from the British National Health Service which simply assumes that women would not want children to get in the way of a "sex in the city" lifestyle: 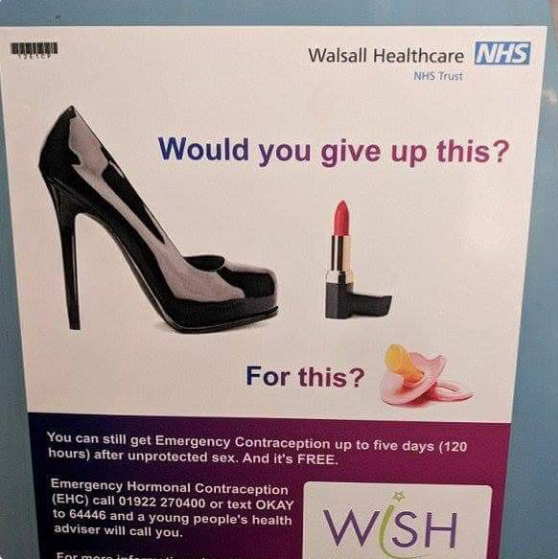 I don't mean to suggest that traditionalists cannot, or should not, aim to succeed in their careers. We do have to think through, though, how in a practical way non-economic values can be upheld within society.
Posted by Mark Richardson at 9:56 pm