Linda Sarsour is a Palestinian Muslim American and co-chair of the recent women's march on Washington. She is also, it has emerged, a supporter of sharia law.

So try and wrap your head around this: the feminist movement of today wants to unite Muslim women who support sharia with feminists "fighting the patriarchy".

And just to add to the fun, Linda Sarsour is tetchy with the role of white women in the women's movement: 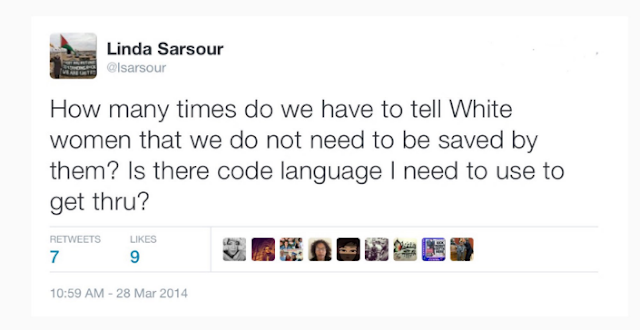 It wasn't that long ago that American feminists were organising topless slutwalks. Now they are pushing, as a symbol of "We the people," a woman wearing a hijab: 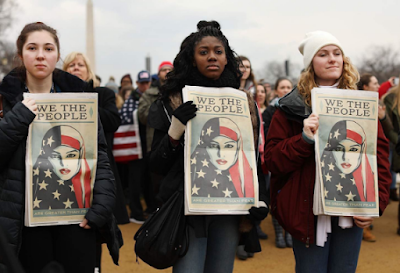 Has the "Muslim woman in a hijab" become a symbol of the "value bearing other" for liberals now? If so, this is going to clash mightily with the "absolute individual autonomy to do whatever I like with my body" aspect of feminism.

And what will white feminists in America do when they realise that a racial politics is being played out against them and not just against white men? When it becomes clear that they too are a target of this kind of politics?

I'll finish with a photo that would have perplexed the feminists of the 1980s. It is a photo from the women's march showing an "emotional moment" when white women had hijabs tied on them by Muslim women: 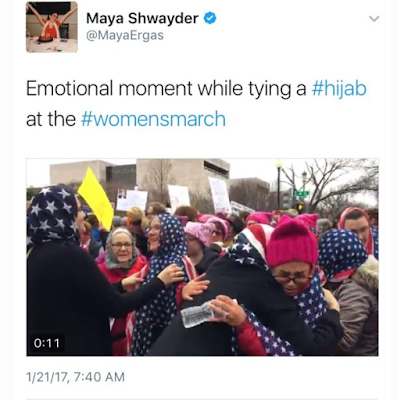 Posted by Mark Richardson at 11:20 pm