Was Zimmerman's photo doctored to better fit the script?

I clicked on a Daily Mail story about George Zimmerman and was surprised to see just how Hispanic he looks: 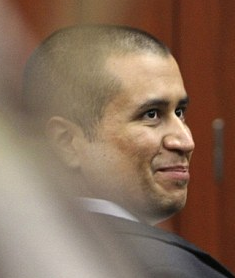 My immediate suspicion was that the early photos of Zimmernan may have been photoshopped to make him seem whiter. It fits the liberal script better if Zimmerman, who is facing trial for shooting a young black man, Trayvon Martin, can be portrayed as a "white racist" (if you are unaware of the background to this story see here).

I don't know if I'm right in suspecting the media, but look at the set of images below. It shows the images of Zimmerman used by major media outlets after the story broke. It does seem as if both the ABC (American Broadcasting Company) and CBS have altered the original photo - the last two photos in particular seem suspect. 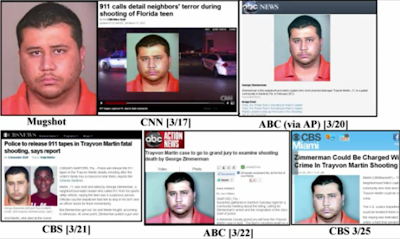 Posted by Mark Richardson at 8:36 pm