Should childhood really be gender neutral?

I hadn't realised but there is also a feminist campaign in the U.S. against distinct toys for boys and girls (at the moment they are targeting LEGO). At the Fox news site they did a survey in response to this campaign to gauge public opinion. Here are the results: 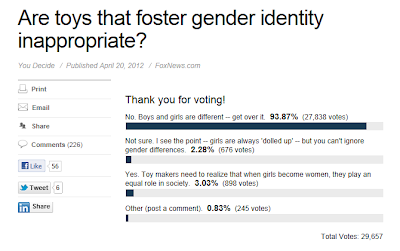 As you can see, the response is overwhelmingly on our side. 94% think it's OK to have toys that foster a distinct sex identity. Only 3% are against, with the rest in the undecided/other category. Nor are the numbers small: almost 30,000 cast a vote. Admittedly the numbers might be a bit different at a more lefty news site, but even so you can see that the campaign to make childhood gender neutral isn't a popular movement - it's being carried out by activists without public support.

Posted by Mark Richardson at 12:26 pm