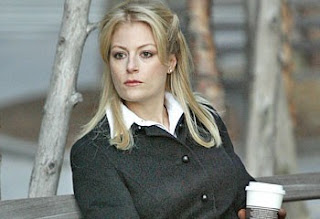 Vivienne Dye is a strikingly good looking woman who was employed by the Commonwealth Bank here in Australia in 2005.

Initially she worked with a group of women in publicity. But things went sour when she got pushy; despite being new on staff she submitted a plan to change everyone's role in the work team, with herself being promoted and getting a pay rise. Her inability to get on with the other women led to her being given training sessions on workplace relationships. The training didn't work out well and she was referred to a workplace psychologist.

She was then sent to work as a business analyst with a group of men. That proved to be a big mistake. She got on well with her mentor, Angus Patterson; others in the office believed that she was flirtatious with him. They got on very well.

But then a social function took place at which her boss, Michael Blomfield was present. The events at the function are contested but some of the other female staff observed Dye chasing after Blomfield and warned him she was trouble. Blomfield went on a walk with her and told her that a relationship was out of the question.

Dye then made a claim that Blomfield had sexually harassed her. She rang her friend and mentor Angus Patterson and told him she was going to destroy Blomfield and his family. When Patterson declined to offer his support, she then made an accusation of rape against him.

The bank made an internal investigation and found her claims were baseless. The claims, however, were leaked to the press and the reputations of the two men suffered. Both left their positions at the bank; the bank did, however, support them during their trial.

During the trial Dye was found to be an unreliable witness. She made a number of claims that were disproven, for instance, through telephone records. The judge found the two men innocent.

There's an interesting and more detailed account of the story here. I decided to post a small item on the court case because it's another reminder to us that women are not always the innocent victims in these matters.
Posted by Mark Richardson at 11:41 am