An advertising campaign by a major shoe retailer in France has sparked controversy in that country. Tiberge at Gallia Watch (and Lawrence Auster at VFR) have covered the story.

In short, the shoe retailer, Eram, has attempted to push the liberal line on family in their ads. I've pointed out many times that there is a clash between liberal orthodoxy and the traditional family. Liberal autonomy theory claims that we are human to the extent that we self-determine our lives. Therefore, the aim must be to self-create our own unique living arrangements. But the traditional family doesn't allow for this: first, because it is traditional rather than self-chosen; second, because it is singular rather than diverse; third, because it has a clear and fixed definition.

Radical liberals respond to this problem by wanting to abolish the family altogether. But more moderate liberals want to "reform" the family, by making the definition of the family vaguer ("family...whatever that may be"), by making it more diverse, by making it less stable and by making its boundaries more "fluid" and "shifting". This makes it seem as if family can be whatever you yourself make it to be, i.e. your family becomes an act of autonomous will or choice.

Eram, the French shoe company, wants to have things both ways. It wants to be seen as both pro-family, but also as being trendily liberal. So they've come up with an advertising slogan "The family is sacred" and illustrated it with the following ads: 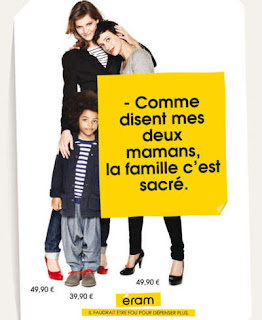 In the ad above, we have two heterosexual looking women pretending to be lesbians whilst raising an adopted African boy. The ad reads "As my two mummies say, the family is sacred". 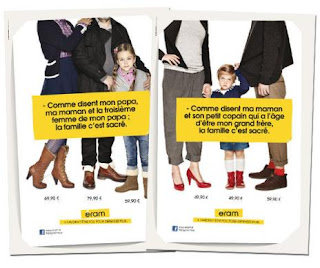 So the family can be anything and yet it is also sacred.

What we're seeing here is the playing out of an ideology. It's an ideology that is deliberately set against the stability of family life and yet still wants to claim the positive mantle of "family" to garner emotional support. And all the while the most radical and consistent followers of the ideology, those who take the idea of autonomy and independence most seriously, won't want to be "restricted" by family at all.

Update: Laura Wood's take is that the ads are ambiguous and that the last two ads in particular could be seen as sending up the deconstructed family. That's possible. There might well be some tongue-in-cheek humour intended in a child saying that his dad's third wife believes that family is sacred. But on its Facebook page the company defends the ads by stating:

Each family is unique, that is why it is sacred! Unusual, creative, sporting or glamorous, it is part of your personality and your life.

At a time when there are more and more divorces in France, when homosexual marriage has just been legalized in New York, Eram is getting into the act and showing, both in billboards and in magazines, family portraits of a type never shown in the advertising world: unstructured, recomposed, shattered, deconstructed. Children who have two moms, others with one father, one mother, and three step mothers, still others where the step father has the same age as the older brother. Hey, this is "real" life. But if families explode, the spirit of the family remains. For, no matter what, the family is sacred."

Whatever its motives, the company is running with the idea of the "new" family in its advertising campaign. I think we'll see more of this kind of thing in the future.
Posted by Mark Richardson at 1:40 pm