One of the looming battles in the culture war is the issue of when to marry and have children. Feminists have urged women to stay independent of men; this hasn't, in general, led women to reject the idea of marriage and motherhood outright. It has, though, encouraged the trend for women to defer family formation until some time in their 30s.

But this creates a number of problems including the following:

Feminists are mostly winning this battle in the culture war. However, there do exist opposing voices, warning of the problems created by leaving things so late, such as the BBC Radio DJ, Lauren Laverne:

BBC radio presenter Lauren Laverne has criticised the growing culture of ‘freemales’ who choose an independent life over having a husband and family.﻿﻿﻿﻿
﻿﻿﻿﻿

The 32-year-old BBC 6 Music host says women who delay having a family in their twenties risk never finding ‘a sense of completion’.
Despite initially being seen as a ‘ladette’, the ex-pop singer married when she was 27 and had her first child, Fergus, two years later. She gave birth to her second son, Mack, in September last year. Her husband is DJ Graeme Fisher.﻿﻿﻿﻿﻿﻿﻿﻿
But she admits her decision to start a family is in stark contrast to her friends who are not interested in settling down until they are 35.
﻿﻿

‘I was getting married when none of my friends even lived with their boyfriends, and then I had Fergus,’ she told Red Magazine.
‘It’s great that you get to be young for longer, but the downside is people worry too much. If you’re with the right person, do it, get married, have the baby, take a leap of faith. You can’t plan everything, you can’t wait and wait and wait.
﻿﻿﻿﻿﻿﻿﻿﻿﻿﻿

‘The nice thing now is that I have a sense of completion about my family and the future. You can only really get that when you crack on when you’re young.’

Her friends are being foolish. They are not willing to settle down until they are 35 - exactly the age at which a woman's fertility starts to peter out. They are not even making relationship commitments in their late 20s.

Lauren Laverne is not alone in speaking out against trends toward delayed marriage. Two American researchers, Mark Regnerus and Jeremy Uecker of the University of Texas, have recently published their findings on the state of play in relationships between young Americans. One of their conclusions is that women, by delaying a serious commitment to relationships, are creating a player culture amongst men, which then undermines women's desires later on to find a committed relationship:


Researchers found that since women in the 18- to 23-year-old group feel they don't need men for financial dependence, many of them feel they can play around with multiple partners without consequence, and that the early 20s isn't the time to have a serious relationship. But eventually, they do come to want a real, lasting relationship. The problem is that there will still be women who will have sex readily without commitment, and since men know this, fewer of them are willing to go steady.

"Women have plenty of freedom, but freedom does not translate easily into getting what you want," Regnerus said.

This issue was even openly discussed in the usually liberal Salon magazine. There was a very respectful interview with the two researchers about the issue of women having "lost control" of relationships, with increasing numbers of women reporting about modern relationships that "I don't like this script, it sucks." One of the researchers gave this advice:

I don't think it's in women's interest to play the field for a long period of time. It can get depressing, not only about their relationships but to see the pool of men in their 30s who are available. My advice is if you find somebody who you love and who loves you, make it work...

...Women need to somehow reacquire control over the direction of relationships. They feel like they don't have control.

Women who have been brought up to believe that independence is what matters most won't easily warm to the idea of marrying earlier. One woman's comment in reply to the two American researchers was that,

It strikes me as the typical fear tactics used to keep women's ambitions and autonomy in check because many men don't have the personal skills to succeed in equal partnership.

Some of the late marriage camp are also picking up on a statistic which claims that women with college education, their own income and who marry later are less likely to divorce. So you get comments like this one:

A woman is in the best position to avoid divorce if she is college-educated (the more the better), has her own income, and she marries no sooner than age 25. Women who fit this description have a very, very small likelihood of finding themselves in divorce court - WELL under national averages.

So this begs the question... is the goal for women to GET married, or to STAY married? Personally, I'm voting for the latter. 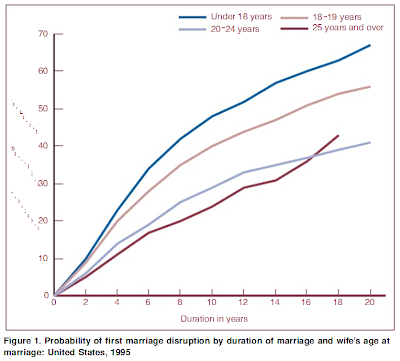 The lesson from this data set is that marrying below the age of 20 does significantly increase the risk of divorce for a woman, but marrying at 23 involves no greater risk than marrying at 29.
Posted by Mark Richardson at 7:36 pm