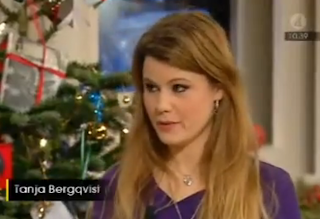 Is there resistance in Sweden to state-imposed feminism? I'm pleased to report that I've found at least one objector. Her name is Tanja Bergkvist, she's a mother of young children and she has a PhD in mathematics.
I'm a bit reliant on google translator for understanding her articles, but it's possible to get the gist of what she's arguing. For instance, in 2008 she wrote an article for a Swedish newspaper in which she criticised gender researchers who claimed that playgrounds were sexist and therefore harmful to children.

Tanja Bergqvist's response was to wonder how humanity managed to survive for thousands of years before the arrival of the gender researchers. She wondered if it would soon be thought better to take children from parents at birth and hand them over to be raised in gender neutral indoctrination centres.

She noted that already in preschools hero stories and dolls had been removed and that during gymnastics girls weren't allowed to wear feminine outfits but instead dressed like boys in T-shirts and shorts.

She asked how it fitted into official diversity policy that girls weren't allowed to express themselves differently to boys and what kind of message it sent to girls that it was the girl's clothing that was disallowed.

She then cut to the heart of things by asserting that gender roles are not only hardwired (genetic), but that they have played a positive role in human development. The difference in gender roles shouldn't be thought of as a problem if they are equally valued.

Boy and girl babies already show differences in play, she continued, which is evidence that such differences are natural rather than socially constructed. The aim of making play gender neutral is therefore unlikely to be practicable. What if girls prefer to pick flowers and boys to collect rocks? Would the authorities then act to remove such gender-encoded items from the forests?

You can see, I think, even given the limitations imposed by the translation, that Tanja Bergqvist is making some serious and principled objections to the state sponsored feminism in Sweden (there's more at her website here).

She is certainly up against it. In Sweden the government has adopted a policy of gender mainstreaming. That means that all government agencies must take part in transforming Swedish society along the lines of feminist patriarchy theory. Here is Jens Orback explaining the Swedish approach to the UN back in 2006:

Our work for gender equality is governed by our understanding that a gender-based power structure exists, meaning that we see that women are subordinate to men and that this is something we want to change. To be successful in making these changes we must ensure that a gender perspective is present in all policy areas. The gender mainstreaming strategy is therefore essential if we want to achieve a gender equal society.

In 2004 Lise Bergh had this to say to the UN on behalf of Sweden:

Equality between women and men, girls and boys demands no less than a fundamental change of society. Our societal, political and cultural institutions, be they public or private, must be changed. In every field of life and whenever women and men are affected by political reforms and decisions, a gender perspective must be the point of departure. All political issues have gender implications and gender equality must therefore be addressed wherever political decisions are taken or resources allocated and wherever norms, rules and values are set.﻿

﻿
And what does this radical change the Swedes are determined to implement involve exactly? You can get some idea of the answer in a training document, the Gender Mainstreaming Manual. This explains that Swedish officials are to be trained in a concept of gender equality drawn from a little known Swedish historian by the name of Yvonne Hirdman (p.15)

Hirdman doesn't use the term patriarchy, but refers instead to "the gender system". She believes that the gender system influences all the structures of society and is perpetuated through "segregation" (men and women doing different things) and "hierarchy" (men being considered the human norm).

So, logically, if you follow this theory of gender equality you have to change the structures of society so that there is a unisex system instead of a differentiated one.

Imagine you were an official in some Swedish government agency. This is what would await you:

Anyway, if the Swedish state has its way then society will be deliberately and systematically transformed so that gender will no longer matter. There will be no differences in the work and family patterns of men and women; men and women will remain independent of each other; and there will be (in theory) equal autonomy ("the same power to shape their own lives" p.15).

Tanja Bergqvist is one woman throwing cold water on the plan. She believes that sex distinctions are natural and hardwired; that they serve a useful purpose in the development of human society; and that the Swedish state is being intrusive in its zeal to overcome gender.

And I'm with Tanja. Masculinity and femininity are real qualities which are rightly expressed in patterns of human relationships. Our "power to shape our own life" is impoverished if something as important as our sex is disallowed as a functioning component of our lives. And men and women are made for interdependent relationships rather than for a unisex independence.

Finally, it should be crystal clear to anyone who merely glances through the Gender Mainstreaming Manual, that a liberal state like Sweden is not neutral. It runs according to a very specific state ideology that is systematically implemented through state agencies. Nor is this a moderate and benign ideology; its own proponents agree that it is a radical policy aimed at a "fundamental change of society".

The liberal mask is well and truly off in Sweden.
Posted by Mark Richardson at 8:20 pm