So the left now thinks burqas are liberating?

The left has entirely flipped its position when it comes to the burqa. Twenty years ago, feminists would often cite the burqa as evidence of the nasty patriarchal oppression of women. I can remember feeling aggrieved for being targeted as a Western man for something that was outside the Western tradition.

That's why it's so strange for someone of my generation to witness the left now coming to the defence of the burqa.

Here's the latest example of this from Australia. A Sydney artist has painted a mural on a wall with the slogan "Say no to burqas":


The response of one radical leftist woman, Kiraz Janicke, was to create this artwork: 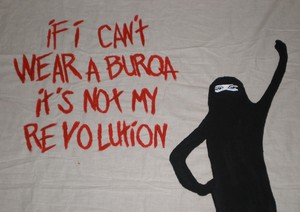 So burqa wearing women have been transformed from victims of the patriarchy to inspiring leftist rebels.

How can the left justify such a change in position? This is the Indymedia line:

The anti-burqa mural articulates one form of patriarchy in the guise of what he perceives to be the patriarchy of another culture. The act of determining what is suitable behaviour for others and calling on the government to regulate this, is typically authoritarian and patriarchal. Empowerment and liberation are not things that can be prescribed and dictated to others. Some people might find empowerment in affirming aspects of their heritage, others by shedding all such traditional values. An anti-racist and anti-sexist politics of solidarity has to act in common with those who are struggling for their emancipation, not dictate what their freedom will look like.

This is an attempt to apply autonomy theory to the issue. The writer is arguing that it is patriarchal to oppose the wearing of the burqa because that would interfere with the self-determination of Muslim women. (Note too the argument that it is "empowering" for "some people" to affirm "aspects of their heritage" - presumably "some people" does not include Anglo-Australians).

Kiraz Janicke, who created the pro-burqa artwork portrayed above, took a similar line:

Some progressives and feminists may find “Burqa revolution” confronting because it portrays a woman demanding the right to wear a burqa — something commonly viewed as symbol of women’s subjugation.

However, as a recent 2000-strong rally in western Sydney supporting the right to wear a burqa shows, for many Muslim women wearing a burqa, niqab or hijab is an affirmation of their identity and an act of protest against the prevailing Islamophobia.

My artwork challenges the argument that banning the burqa can contribute to women’s liberation. Liberation is not something that can be imposed, but must be won through a process of self-determination.

There are three things happening here politically. The first, obviously, is that autonomy (i.e. self-determination) is being thought of as the end aim of politics. The second is that there is an underlying bias toward non-Western traditions, with the affirmation of Muslim identity and heritage being spoken of in positive terms that would never be extended to the Australian identity or heritage.

The third is the idea that liberation cannot be imposed. That sounds very strange coming from the far left, which is not averse to political violence. In fact, Kiraz Janicke is a member of the youth organisation Resistance. This organisation supports the idea of a revolutionary uprising to liberate the people. So when Kiraz Janicke states that "liberation cannot be imposed" she is not rejecting the idea of force to change society along left-wing lines. She is probably imagining (rather hopefully given historical evidence) that the revolutionary change will come from below.

Anyway, the little leftist activist groups in Sydney did organise a violent demonstration against the anti-burqa mural. It seems that the concept of "self-determination" was not applied to the artist.

It's interesting that the far left thinks it can harness Islam for its own purposes. It doesn't show much of a capacity for long-term thinking. If Islam consolidates itself in places like Sydney, what is likely to happen to our handful of lefty activists? Islam is about submission to God, not a self-creating lifestyle. Many of the lefty activists cultivate a punky/feral/queer look that isn't likely to be well-received in a majority Muslim culture: 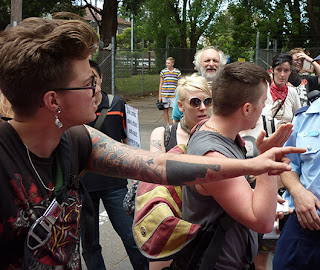 As for the burqa, I think most Westerners, if they were honest, would have to admit that it's an unsettling sight. The following picture is from a demonstration in favour of the burqa held in the Sydney suburb of Lakemba last year: 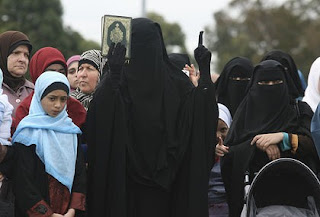 The left is telling us that these burqa clad women are inspiring rebels. I don't see that, I see something very alien to my own tradition and another reason to oppose the principle of multiculturalism.
Posted by Mark Richardson at 1:31 pm