How a law came to pass

A new law has been passed here in the Australian state of Victoria to allow people to change whether they are listed as male or female on their birth certificates:


The bill was introduced a second time by Attorney-General Jill Hennessy, who celebrated its passing on Tuesday night.

"These important new laws are about ensuring everyone can live their life as they choose, and that includes having a birth certificate that reflects their true identity," she said.


As you can see from the quote, the Attorney-General justified the new law by emphasising the importance of a freedom to live as we choose, even to the point of choosing our sex. Supporters of the new law likewise held up placards reading "Autonomy & Freedom," connecting freedom with an autonomy to self-define. 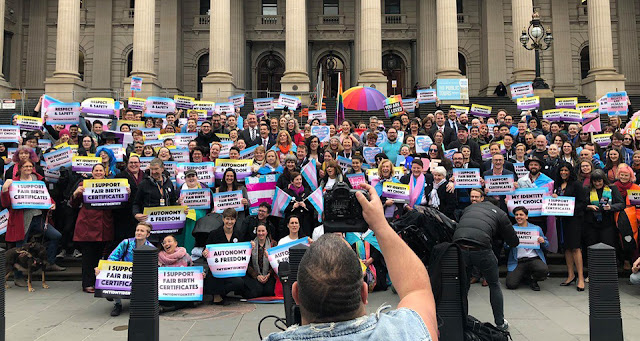 None of this is surprising. Courts in the U.S., for instance, have made very explicit the idea that a right to self-define is fundamental to how moral issues are decided. One example of this was a decision of the Iowa Supreme Court in 2018 which struck down a law requiring women to wait 72 hours before procuring an abortion on the grounds that:


Autonomy and dominion over one's body go to the very heart of what it means to be free. At stake in this case is the right to shape, for oneself, without unwarranted governmental intrusion, one's own identity, destiny, and place in the world. Nothing could be more fundamental to the notion of liberty.


Liberty is being tied together here with an autonomous individual self-defining in whatever direction they choose.

This is not a new notion in the West. It was one of two approaches to freedom that seem to have contested for the Western soul from the early modern period onward.

I wrote a post earlier this year about a dispute in England in 1620 on the question of transvestism. Was it right for women to wear men's clothes? In one pamphlet the reasons given in favour were very similar to those still being made today. The transvestite woman defended herself with the argument that freedom existed when there was no "restraint from those actions which the mind of its own accord doth most willingly desire". Therefore, she was free if she was able to follow her desire to dress as a man. Similarly, she claimed that "for me to follow change according to the limitation of mine own will and pleasure, there cannot be a greater freedom." She believed that she was free if she could act with nothing to limit her but her own will and pleasure.

But in 1620 there was another way of thinking about freedom. Her opponent in the debate reproaches her with these words:


You have wrested out some wit, to wrangle forth no reason; since everything you would make for excuse, approves your guilt still more ugly: what basest bondage, or what more servile baseness, than for the flattering and soothing of an un-bridled appetite, or delight, to take a wilfull liberty to do evil, and to give evil example? This is to be Hells Prentice, not Heaven’s Free-woman.


There is no freedom, in this view, in asserting "unbridled appetite, or delight". If we choose to act basely, then we are not exercising freedom, but falling into a servile bondage.

The woman eventually reveals that she never really wanted to wear men's clothes but only did so to shame men into acting less foppishly themselves. She quotes some lines of a poem in which the hero has been beguiled by a witch and has lost his manliness:


His Locks bedewed with waters of sweet savour;
Stood curled round in order on his head;
He had such wanton womanish behaviour,
As though in Valor he had ne’re been bred:
So chang’d in speech, in manners and in favour,
So from himselfe beyond all reason led,
By these inchantments of this amorous Dame;
He was himselfe in nothing but in name.


The lines are significant because they suggest that we have fit ends within our nature as men and women that we know best when in a certain state of right mind/reason, but that we can be led beyond reason and therefore fail to inhabit what we are meant to be. Freedom, in other words, is more a capacity to act according to what is best within our given natures as men and women, rather than an autonomy to self-define.

The man is inspired to firmly reject his own effeminate dress and declares:


From henceforth deformity shall pack to Hell, and if at any time he hide himself upon the earth, yet it shall be with contempt and disgrace...Henceforth we will live nobly like ourselves


The writer of the 1620 pamphlet felt that the more he approached the nobler qualities of manhood the more he lived as himself.

The transvestite woman did not win the argument in the 1620 pamphlet but today she inhabits the benches of supreme courts throughout the Western world. It is her understanding of liberty, as a freedom to self-define, which is now the ruling principle, having vanquished the other, once influential, Western tradition that connected freedom, reason and nature.
Posted by Mark Richardson at 10:59 pm