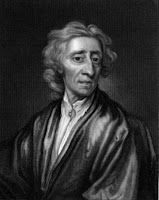 Dr Allan Carlson believes that the English philosopher John Locke set the template for the modern family back in the late 1600s. According to Carlson, Locke thought that the traditional role of fathers in the family was unnatural. All men wanted to do, by nature, was to survive as individuals and beget children (and then leave). Therefore, men were given power and authority over women and children as a way of luring them into family life.

And so, for Locke, the traditional paternal role was not only narrow in purpose, but politically damaging as it was used to justify the rule and authority of kings. Therefore, it had to be reformed:


"Since his overall project demanded an end to Patriarchy at the political level, so as to undermine the claims of kings, Locke deemed it necessary to bring an end to Patriarchy within the family as well. His alternative was the “liberal” marriage – of limited purpose and authority – where men might find compensatory satisfactions in friendships with a wife and children. Locke understood that, while it ran against his premise of gender equality, he still needed to cast the father as the presumed head of the family, which in industrial society evolved into the “breadwinner” role."


Being the "presumed head of the family" did not mean as much as it once did. As Dr Carlson points out, the paternal role was increasingly dominated by the demands of paid work. Even so, liberals eventually came to believe that even this "soft patriarchy" conflicted too much with liberal beliefs about gender equality. And so Locke's voluntary marital contract, in which women are tied to family by their natural connection to children, and men by their "artificial" role as head of the family, breaks down:


However, some in the liberal order eventually saw that as too great a price. To gain the promised equality, they said, women must instead overcome their maternal instincts and break their affective ties to children and to nature itself. At that point, the contract breaks down. As women renounce their innate purpose, men lose their artificially created one, and the liberal marriage system dissolves.


This overtly feminist step did not take place until the second half of the nineteenth century, but it had its origins in Locke:


While John Stuart Mill, writing in the mid-19th century, was among the first to describe this feminist imperative, its roots lay in Locke. Indeed, he readily acknowledged the validity, in certain societies, of the single-parent family, where “the children are left to the mother, follow her, and are wholly under her care and provision”.

So also with polygamy: systems of one man with multiple wives or one woman with multiple husbands. These too, Locke said, could serve as household forms adequate to the tasks of rearing children as “free and rational creatures”. Such matters were subject solely to cultural acceptance, what Locke called “fashion”.


It would be interesting to follow this observation further. If Locke's end goal really was simply to raise children as "free and rational" creatures, then you could do this in a variety of settings, including state institutions. The traditional family is then put on shaky ground. An alternative approach would be to think of the offices of husband/father and wife/mother as being part of the social context within which we best fulfil our given purposes as men and women. It would also see the traditional family as an aspect of society itself, as its own little commonwealth, with a distinct culture, and with a set of economic, educational, religious and leisure functions that are foundational to the larger society.

Carlson does discuss the problem of the family losing its larger functions in society. According to Carlson, this was something deliberately aimed at by Locke:


Locke’s “Conjugal Society” rested on a “voluntary compact between men and women” that was limited to the “things of their common interest and [common] property”. Under Patriarchy, the economic lives of men and women had been merged, wholly and completely. As expressions of pre-industrial life, such households were also characterised by a great array of productive activities. The sexual and the economic merged fully here.

Locke aimed at families stripped of most functions, economic or otherwise. Property could be held separately, by husband and wife. Since the purposes of marriage were only procreation and the socialisation of small children as rational creatures, and since marriage was always provisional, a strong home economy was neither necessary nor desirable.


I've been thinking about exactly this issue lately. Modern society is rendering men and women increasingly less necessary to each other - at least in terms of social function. Not only is there gender role convergence, in which men and women end up doing much the same thing in society, but so many aspects of life are being outsourced, that it's much more possible for people to survive without the support of family.

To the extent that we can, we need to "un-Locke" the family. The family will not rest well on the basis provided for it by Locke and his successors (which is increasingly limited to a provisional friendship between "partners" of any sex). It needs to widen once again its functions within society and the paternal role needs to be grounded on fundamental aspects of masculine nature, identity, social roles and telos/purposes.
Posted by Mark Richardson at 1:58 pm