Shelley & the descent of the left

An American teacher gave her students a test and asked them to identify "obstacles that keep people from moving ahead". One student gave the simple answer "white people". 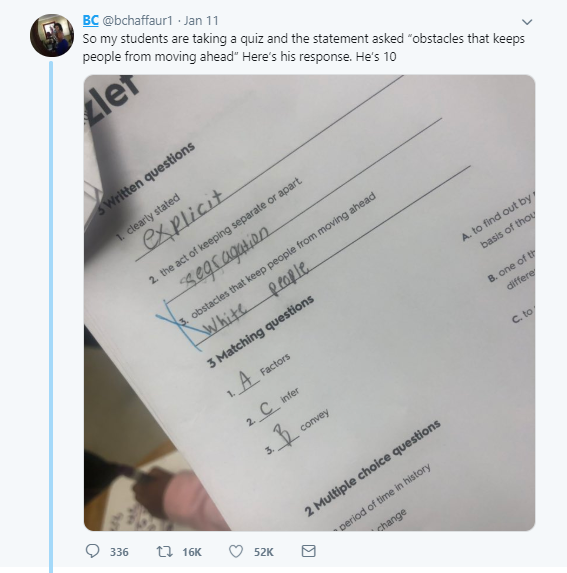 Now, you might ask what this has to do with the English poet Shelley. As it happens, Shelley is part of a chain of thought on the left side of politics that ultimately leads to this answer.

In my last post I tried to explain why Shelley's concept of freedom was inseparable from a concept of equality. Shelley's political philosophy went something like this:

1. Human nature is not "tainted" in the sense of being fallen or having a fixed potential to do evil.
2. The reason why people do the wrong thing is because of existing political institutions which are based on some people having power over others (i.e. power structures).
3. Man can be regenerated if these power structures are abolished.
4. Power structures were those of the ancien régime, i.e. kings, aristocrats and priests.
5. This power structure should be replaced by democratic rule.
6. If power structures were replaced, then people would live an "Edenic" existence, i.e. a return to an idyllic, untainted existence as before the Fall.
7. Shelley, as a poet, unsurprisingly conceived this to be a kind of poetic existence within nature, with people living in complete freedom and equality, doing as they wanted, motivated by pure, selfless love, without jealousy or acquisitiveness etc.

This was how Shelley saw things in 1820. A generation later Karl Marx came along and made a key observation. Marx realised that you could get rid of the ancien régime, but in its place you would still have a power structure. The bourgeoisie would still hold power over the proletariat within a democratic system. Marx, cleverly in a way, revised the Shelleyan system, by noting that if the working class were to take power, there would be no other class below them to exploit. In other words, there would no longer be a class based power structure.

In that case, thought Marx, the power structure of society would be abolished, and you would have the kind of Edenic existence that Marx briefly sketched in his writings. His Eden was less poetic than Shelley's, but was similarly based on the idea of abolishing nations and families, and having people wander round as "unencumbered" individuals, doing whatever productive work they felt like doing (fishing, writing etc.).

Marxism is clearly a tweaking of Shelleyism, or at least of political ideas that were already in vogue.

And what of the modern left? Well, there has been a further tweak to the system. Even though Shelley did want to abolish sex distinctions, nations and marriage, he believed the key power structure to be overthrown was the class one (aristocracy). The same for Marx (the bourgeoisie). The modern left, though, focuses more on race and biological sex as power structures to be deconstructed (whiteness and the patriarchy). Only then will humanity reach its final destination of true freedom and equality.

So you can see why that school student dutifully answered that it was "white people" who were an obstacle to people moving ahead. That student is the end product of a current of thought that has existed within the left since at least the 1820s (probably earlier).

There are a few other things I should point out. First, there are other currents of thought which have also shaped the modern left. For instance, there is still the influence of the Fabians, who believed that progress would be led by a class of neutral experts employed by the state, i.e. by a technocracy ruling along scientific lines.

Second, it's interesting that the modern left no longer envisages the end point of history as a return to Eden. Perhaps that's a result of Christianity no longer shaping the mental landscape, even of those rejecting it, as much as it used to. What we are left with is a belief that white men are the privileged class upholding a power structure and that freedom and equality will finally be achieved when this power structure is defeated.

Third, it is noticeable that some of those pushing the modern version of Shelleyism are doing so to gain power for themselves, rather than to achieve a vision of utopian freedom. Middle-class feminists are often most interested in using "gender politics" to gain a competitive advantage in high status professions. They want status, money and power for themselves, rather than a system in which such things no longer exist. Similarly, it is clear that if whites become a minority in Western countries, that power will simply be passed to a new non-white majority rather than there being no power structure.

The main conclusion to draw from all this, though, is that it is the initial assumptions of Shelley that have to be challenged. Where did these beliefs of Shelley come from? I can't be exactly sure, but it's possible they go back all the way to thinkers like Hobbes and Locke. Shelley himself traced the intellectual journey of his ideas about human nature as follows (from his 1820 political manifesto):


the new epoch was marked by the commencement of deeper enquiries into the point of human nature than are compatible with an unreserved belief in any of those popular mistakes upon which popular systems of faith with respect to the cause and agencies of the universe, with all their superstructure of political and religious tyranny, are built. Lord Bacon, Spinoza, Hobbes, Boyle, Montaigne, regulated the reasoning powers, criticized the history, exposed the past errors by illustrating their causes and their connexion, and anatomized the inmost nature of social man. Then, with a less interval of time than of genius, followed Locke and the philosophers of his exact and intelligible but superficial school. Their illustrations of some of the minor consequences of the doctrines established by the sublime genius of their predecessors were correct, popular, simple and energetic. Above all, they indicated inferences the most incompatible with the popular religions and the established governments of Europe.


Shelley here praises Hobbes (and others) for having "anatomized the inmost nature of social man" and then praises Locke for having popularised the genius of thinkers like Hobbes.

So what was Hobbes' view of the nature of man? Hobbes began by imagining a state of nature in which men were free to do as they wanted. Hobbes then argued that in such a state of nature life would be short and brutish as individuals would attack each other and there would be no security of life or property. Therefore, argued Hobbes, individuals rationally made a social contract to give up part of their rights to government in return for such security. Hobbes used this argument in favour of the authority of kings.

The problem with this Hobbesian view is that it it undermines natural, uncontracted, prepolitical forms of human community, such as family and nation. The reality is that we don't begin as disconnected individuals, reluctantly combining via a social contract. We are by nature social creatures, and we express important aspects of our created natures within a social context.

It is possible that Shelley ran with the Hobbesian view, as it undermined the idea of a natural and/or divine order, but that he refigured it by challenging the idea that human nature was selfish and violent. In other words, Shelley built on some of the framework established by Hobbes (autonomous individuals in a state of nature) but made these individuals naturally good and therefore able to live a peaceful, free and equal coexistence, once the tainting influence of power structures was removed.

If we want to reject modern leftism in a principled way, it is possible that we have to go back all the way to the seventeenth century and reject the Hobbesian way of framing politics.
Posted by Mark Richardson at 5:46 pm