Just how free is Cardi B?

Cardi B is a popular Caribbean-American singer. A recent song, "City Girls", currently has 32 million views on YouTube. The song not only has coarsely sexual lyrics, the video clip features more than a dozen women dressed in G-strings twerking, i.e. shaking their backsides suggestively.

It's supposed to be sexy, but I couldn't help but find it culturally alien. It just seems so odd - there are women standing on their heads twerking, others on their back, some of them squatting. It looks atavistic - a reversion to a primitive mating ritual.

I think there's a reason for my response to the video, which I'll explain later. But I'd like to begin with this: 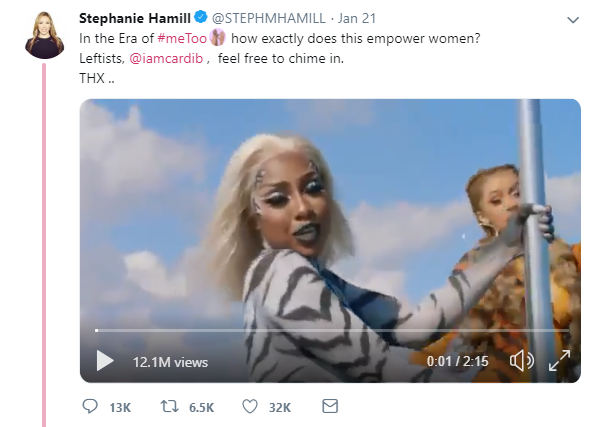 Stephanie Hamill's complaint is that Cardi B's video does not empower women. That's a poor way of criticising what's on display. After all, in a liberal society "female empowerment" means women rejecting customary restraints on their behaviour in order to do whatever they feel like doing.

Cardi B is dutifully following the logic of female empowerment. She is expressing her sexuality as she wants to, without regard for any traditional standards or norms. She is taking empowerment to the next level.

And that's exactly what many of those commenting on Stephanie Hamill's tweet pointed out. A selection:

Cardi B herself replied to Stephanie Hamill along similar lines: 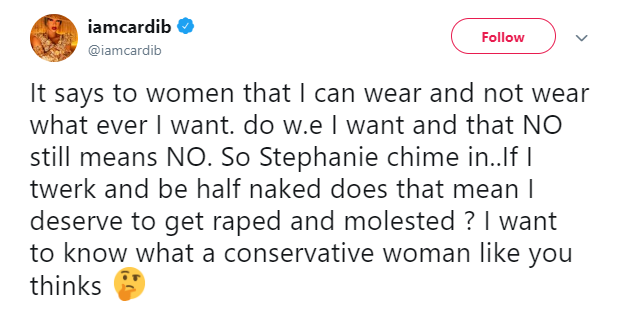 So saying the video is not "empowering" is ineffective. People will just respond by arguing that the video shows women asserting their power to act however they want, without judgement, and that there should be no negative consequences in doing so. This is precisely in line with what female empowerment is understood to mean.

So what is a better way of criticising the video? Liberals would have us believe that they are creating a society based on freedom and equality, by which they mean a society of equally autonomous individuals. However, the issue of female empowerment highlights that you cannot have an equality of autonomy - that this cannot, in practice, be realised, and therefore the attempt to achieve it is misconceived. Second, the issue of female empowerment demonstrates the falsity of the liberal understanding of freedom.

In other words, the liberal approach does not deliver in practice either true freedom or equality - and these are the very things that liberalism attempts to base itself on.

Let's start with equality. Some of the comments to Stephanie Hamill's tweet pointed out that there is a double standard when it comes to sexual expression. Women are "empowered" by twerking their naked backsides, but if men were to expose themselves in public in a similar way they would be condemned.

What this points to is that it is difficult to apply the principle of acting however you feel to both sexes. In general, if you want women to be able to choose whatever they feel like, without judgement or consequences, then men have to be the ones to enable these choices, to bear the brunt of the fallout of these choices, and to act responsibly to hold society together.

It's not surprising, then, that at a time when women are encouraged to be "empowered", men's behaviour is increasingly scrutinised, monitored and policed and that men are often held to traditional standards in a way that women no longer are.

Which brings me to the most important point to be made in all this. It was once thought that man was a "rational animal", meaning that man had both an animal nature but also a rational nature that could discern the good and that could direct the animal passions to their proper ends. Freedom was understood to mean the achievement, through disciplined habits of virtue, of a rational self-control over our own person.

It's not that the animal passions are necessarily bad or to be suppressed; the insight is that we are only free to act as we know we should when we are in our right mind, rather than under the control of our animal passions.

And that was embedded within Western culture for millennia. That's why there are so many derogatory terms in our language for a loss of rational self-control over our animal impulses: dissolute, dissipated, wanton, licentious, promiscuous, libertine, loose, profligate - even the term "liberal" was once sometimes used in a pejorative way in this sense.

And I think that's why Cardi B's video seems so culturally alien to me. There is no restraint on the animal passion side of human nature in it. It depicts humans as rutting animals; there is no influence of the rational nature that was once considered pivotal to human freedom.

Would someone under the direction of their rational nature favour sexual immodesty? I don't think so. The higher good is for men and women to achieve a deep and stable emotional and physical intimacy with a person of the opposite sex, one that will provide enduring support even into old age.

Someone who is oriented to this goal will act modestly when it comes to their sexuality. They will be oriented to spousal love, and will want to give of themselves to that end, not promiscuously.

The aim for women, just as for men, is not to be "empowered" in the liberal sense, but to order themselves to the good, including the common good of the communities they belong to.
Posted by Mark Richardson at 10:23 pm