Is it Gough's fault? 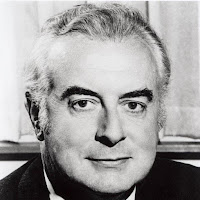 Back in August Fraser Anning gave his maiden speech in the Australian Senate. It was a bold speech that ventured outside the liberal orthodoxy that dominates politics in this country.

It's likely that Senator Anning's politics are the closest to my own within our parliament. Still, I'm going to make a criticism in this post of one aspect of his worldview.

Senator Anning has recently published an opinion piece on the topic of the Liberal Party & the Overton Window. The argument he makes is that Australian politics was good up to the election of Gough Whitlam in 1972. According to Anning:


...the political consensus on identity, values and so many other vital issues which existed between the major parties of the left and right up until 1972 was shifted radically to the left by the Whitlam government and has never recovered.

...The “acceptable” window of political discourse in the days of Sir Robert Menzies, Jack McEwan and Arthur Calwell, which was reflected by not only by the media of the day but also in the views of the vast majority of Australians, has been shifted radically to the left since that time.


The electorate rejected Whitlam in 1975, but the Liberals under Malcolm Fraser did not reverse Whitlam's policies and Anning sees this is as being the key to what has gone wrong:


Thus while the radical left in Labor may have conceived of the destruction of the wonderful, prosperous and cohesive nation Menzies bequeathed us, the only thing that made it possible and enduring was the collaboration of the very party that he founded.

It is in fact the Liberal Party, not Labor that has enabled ratchet socialism to gradually overtake our nation and has shifted the Overton window to the far left.


I don't think this adequately describes what has happened in Australia. Since the 1870s both the left and the right wing of Australian politics have claimed the mantle of being the "true liberals", leaving us with no party committed to conservatism. It is therefore not surprising at all that the Liberal Party has pushed our culture along ever more liberal lines.

That's why Anning's time frame for change is inaccurate. Take, for instance, the push toward diversity. That began in the 1930s with Arthur Calwell, one of the men Anning thinks of as supporting traditional Australia:


In newspaper articles, speeches made as president of the Victorian Labor Party during the 1930s, and later after election as federal member for Melbourne in 1940, Calwell's deep concern for social justice was invariably linked with the creation in Australia of an ethnically mixed society through large-scale immigration.

...in a confidential note addressed to Chifley in 1944 he wrote of his determination to develop a heterogeneous society


Now, it's true that Calwell only wanted to take this principle "so far". He wanted a diverse European Australian country rather than a mono-ethnic British Australian one. The problem is that once the principle is in place the next generation will inevitably want to take it to the next step. And that's what happened - and it happened well before Gough Whitlam came to power.

In June 1965, the Labor Party platform changed to omit any mention of a white Australia policy, with immigration being decided instead primarily on economic grounds.

Prior to that, when Menzies was PM, the Liberals had (in 1958) changed immigration rules to allow non-European residents to become citizens. In 1966, the Holt Liberal Government announced that non-Europeans were to be admitted as permanent residents.

As for Malcolm Fraser, he complained in 1968 that one Australian University was teaching:


French, German, Greek, Latin, Hebrew, Italian, Russian and Japanese...the list as a whole is one belonging to the last century except for one of the languages mentioned.


In other words, he asserted in 1968 that our links to Europe belonged to the 1800s and that only Japanese was relevant to Australia in the twentieth century. Is it any wonder, then, that Fraser in 1975 had no intention of pushing back against Gough Whitlam? There was not going to be any push-back, because Fraser was even more for the change than Whitlam was.

Fraser did not see himself as a principled conservative, but as a liberal. He wrote:


Fraser is making it clear that he is only a "conservative" in the sense that he wants to conserve the already entrenched liberal institutions and values. So why then would Fraser try to reverse the liberal policies enacted by his Labor predecessor Whitlam?

(The other gruesome truth is that even in the early 1940s, important policy decisions were being driven by technocrats of various stripes, such as high ranking officials within the Federal Government, academic experts, diplomats etc. and that the rationale was often just "maximum development along modern industrial/economic lines" rather than anything resembling "the conservation of natural forms of human community".)

To understand how politics has developed in Australia it's important to recognise that the mainstream parties on the right have been "right liberal" in their politics rather than genuinely conservative. This includes the Liberal Party under Menzies.

Senator Anning, therefore, is going to get very little support from anyone in the political establishment. His best chance is to appeal over the heads of the political class to the rank and file, particularly those who don't identify as urban middle-class.

A note to Melbourne readers. If you are sympathetic to the ideas of this website, please visit the site of the Melbourne Traditionalists. It's important that traditionalists don't remain isolated from each other; our group provides a great opportunity for traditionalists to meet up and connect. Details at the website.
Posted by Mark Richardson at 7:20 pm