Cardinal Sarah, who hails from Guinea in Africa, has given a speech in Poland supporting that country's stand against open borders:


Every nation has a right to distinguish between genuine refugees and economic migrants who do not share that nation’s culture, Cardinal Robert Sarah has said.

Speaking at the Europa Christi conference in Poland on Sunday, the African cardinal noted that the country refuses to accept the “logic” of migrant redistribution that “some people want to impose”.

In comments reported by Polish magazine Gosc, Cardinal Sarah added that while every migrant is a human being who must be respected, the situation becomes more complex if they are of another culture or another religion, and imperil the common good of the nation.


This is at least tending toward the reformed refugee policy that I have long advocated: that there should be a common fund to finance refugee resettlement, but that to avoid economic migration and to protect existing cultures, refugees should be resettled in the nearest safe country that is most similar in terms of both living standards and culture/ethnicity.

The most striking comment made by Cardinal Sarah was this:


The ideology of liberal individualism promotes a mixing that is designed to erode the natural borders of homelands and cultures, and leads to a post-national and one-dimensional world where the only things that matter are consumption and production.


The quote deserves to be read carefully, as it clearly suggests that Catholics not only can, but ought to, defend "the natural borders of homelands and cultures." 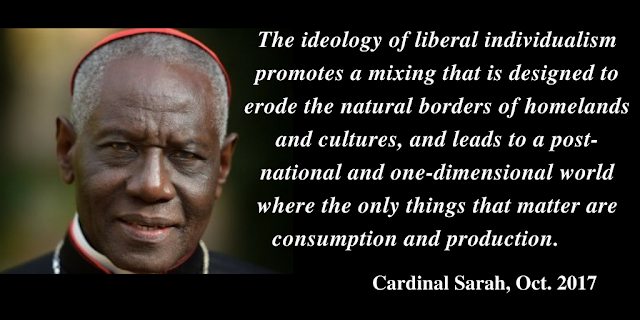 Posted by Mark Richardson at 6:57 pm