So liberals believe that we should self-define who we are, which means that predetermined qualities like our sex are thought to be limitations on the self and on our freedom as autonomous individuals to choose freely in any direction. Therefore, sex distinctions have to be made not to matter. Which explains the following news items from the past week.

First, outrage that a toy pram should be marketed to girls with a "play like mum" slogan:

You would think that this was the most innocent and natural thing for young girls to do, but in a liberal society it is a cause of outrage.

Next was a story that the Australian Army is no longer recruiting men. One recruiting officer complained that he now had to try to protect the Army from Canberra.

Then a story hit the press of an English "hate crime" police officer who warned supermarkets that they should change their "feminine hygiene" signs to something sex neutral like "personal hygiene":

Imagine being a supermarket manager and being told that it is a hate crime to display tampons and the like as feminine hygiene products: 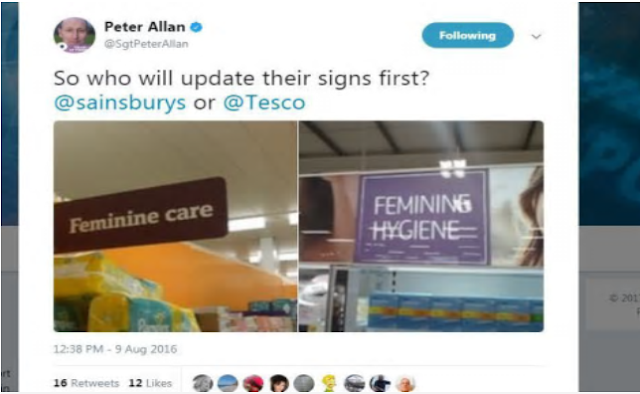 Then there is the decision by NSW authorities to implement a 50% quota for women in hiring new fire fighters. To achieve this the physical strength requirements for fire fighters have been drastically reduced:


It wants new recruits to be able to “drag a collapsed firefighter to safety on their own”, yet to accommodate female applicants, the Physical Aptitude Test has been reduced from a 90kg [200lb] dummy drag over 20 metres [66 feet] to the relatively easy task of carrying a 30kg [65lb] weight for 10 metres [33 feet].

Another story to make the press was the criticism of shoe company Clarks for selling shoes to girls which had heart patterned insoles in contrast to the boys' shoes which had a football design. 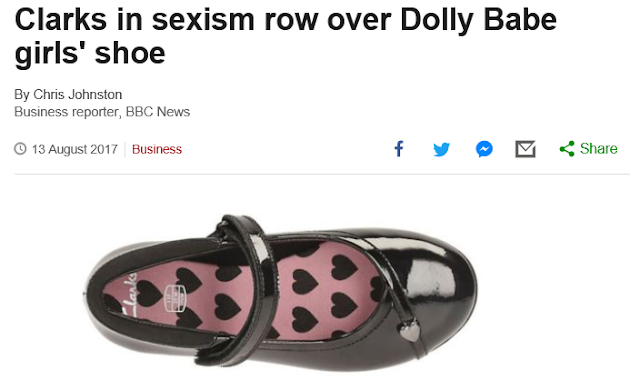 The company has caved in to the criticisms:


The shoe manufacturer has removed the Dolly Babe from its website following "customer feedback" about the name.

"We are working hard to ensure our ranges reflect our gender-neutral ethos," Clarks said.

...Clarks said it was creating more unisex shoes in response to customer feedback and promoting its gender-neutral stance both online and in store.


The issue united both right and left (liberals) in condemning the shoe company:


Jacob Rees-Mogg, the Conservative MP for North East Somerset, also criticised Clarks. "To call a pair of shoes for a girl Dolly Babe is dreadful. It's wrong in all sorts of ways ... this is just really silly," he told the BBC.


Finally, there is this:

It's about liberals who believe that people are blank slates and so if children are caught early enough sex distinctions between boys and girls can be eradicated:


At the heart of the BBC programme are claims made by Dr Abdelmoneim that, apart from having different sexual organs, there are no major physical differences between the sexes at the age of seven, and their brains are almost identical.

He concludes that the explanation for why boys act so differently to girls lies in how they are raised, from the toys they are given to the terms of endearment they hear.


Children at one school were subjected to a bizarre liberal experiment:


So, out went the gender-specifics, no more boys-only football matches, books about fairytale damsels in distress and in came the unisex storybooks and mixed sports teams.

The TV production team even went as far as to enforce same-sex toilets, something the class of seven-year-olds protested at loudly.


In an attempt to bring equality to the classroom, Dr Javid begins by sticking stereotype-breaking affirmations to the walls. “Girls are strong,” one sign reads. “Boys are sensitive,” another says.


This is all so distant from the traditionalist understanding of sex distinctions. We see our individual identity as being closely tied to the fact of being a man or a woman; our sex informs our telos - our life aims and purposes; and at least part of the natural focus of life will be to develop ourselves along masculine or feminine lines, to best fulfil our created nature. So the attempt to suppress, rather than to develop, masculinity in boys and femininity in girls, seems utterly misguided.
Posted by Mark Richardson at 10:27 pm