Bill Kristol is a leading "neoconservative" member of the American Republican Party. I have argued for many years that the establishment Republicans should really be called right-liberals, as they mostly hold to some variant of a classical liberal politics. Bill Kristol was asked how "conservatives" (establishment Republicans) like himself might rebrand themselves and he answered as follows: 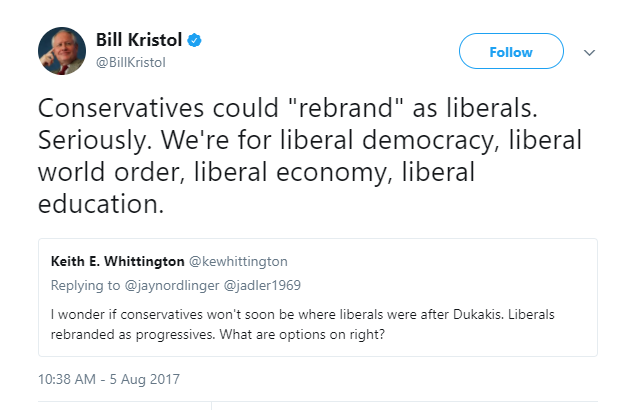 He is happy to rebrand "conservatism" as liberalism. And I hope he does, as using the term conservatism deceives people into thinking they have more political choice within mainstream politics than they really do. The choice is really one between a left liberalism and a right liberalism. You get to choose liberalism.

And in case you are sympathetic to the right wing brand of liberalism, it was Bill Kristol who earlier this year responded to problems within the white American working class by suggesting that the white working class should be replaced by Mexican immigrants.

(Kristol is backed financially by our own Rupert Murdoch.)
Posted by Mark Richardson at 9:55 am