Twenty years ago I thought that little would be achieved until a section of the Western political class (meaning all those people of an intellectual bent interested in politics) broke decisively with liberalism.

It took a painfully long time, but it has now begun to happen. Look, for instance, at the following thread that I found on Twitter. It's written by a young man who has graduated from Oxford in the fields of politics, economics and philosophy. 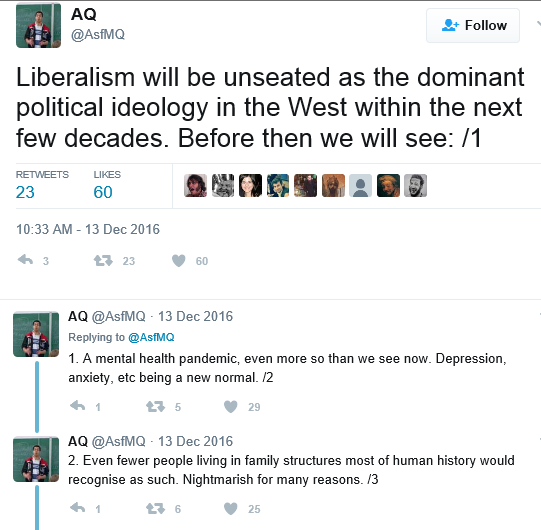 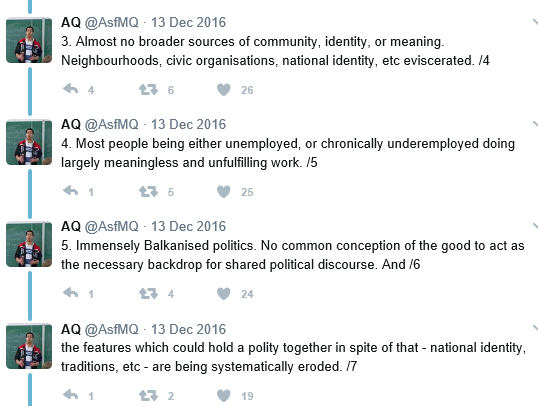 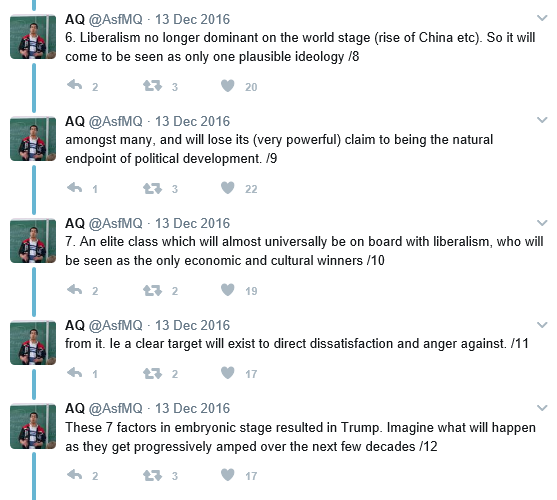 Of the assertions he makes I agree with No.1. The growth in the number of students I teach with severe anxiety issues is astonishing (though I'm not entirely sure what's causing it).

No.2 is likely to take place. Family stability doesn't happen by accident - it requires the support of legal and economic policies, of religious belief, of moral principle and, above all, of a whole series of cultural and philosophical understandings about love, human fulfilment, sexual complementarity, social commitments etc. It seems unlikely that the selfish, atomised individualism that reigns in a liberal society will provide the support that a stable family life requires.

No.3 is already well under way. We will have to see what kind of resistance develops over the next few years.

No.4 I'm not so sure about. It does seem to be true that employment is becoming less stable, with more people working casually or on contracts.

No.5 is already happening and is likely to intensify. Liberals are pushing ahead with ever more radical racial and sexual politics which can only alienate some parts of the population. There is no sign yet that they are drawing back.

No.6 is interesting. We don't talk about this much. Western liberalism is likely to lose some of its prestige as other powers rise.

No.7 is also critical. Liberals will continue to blame white males for failures in achieving liberal utopia. But the liberal elite itself is the obvious target of discontent for the problems of a liberal society.
Posted by Mark Richardson at 9:46 pm