Here is a good traditionalist quote from Abbé Grégoire Celier, who I believe is a French cleric affiliated with the Society of St Pius X (via Wrath of Gnon): 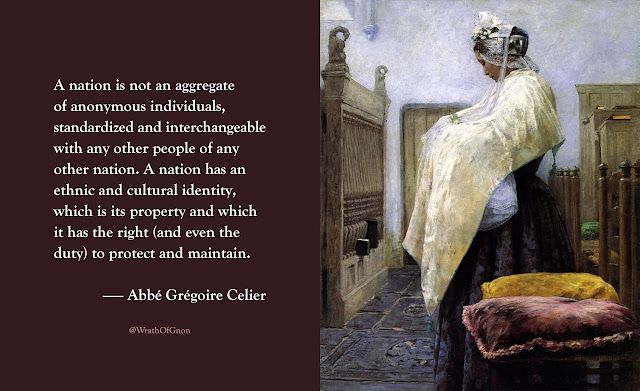 Note the insistence that a nation is not an aggregate of standardized and interchangeable individuals. I was reminded of the relevance of this when reading about comments made recently by Bill Kristol, a leading American neoconservative. During a debate on the difficulties being experienced by the white American working-class, Kristol took the view that rather than trying to help them by limiting low skilled immigration, they should instead be replaced via open borders:


Look, to be totally honest, if things are so bad as you say with the white working class, don’t you want to get new Americans in? Seriously, you can make the case—this is going on too long and this is too crazy, probably, and I hope this thing isn’t being videotaped or ever shown anywhere. Whatever tiny, pathetic future I have is going to totally collapse.

You can make a case that America has been great because every—I think John Adams said this—basically if you’re a free society, a capitalist society, after two or three generations of hard work everyone becomes kind of decadent, lazy, spoiled—whatever. Then, luckily, you have these waves of people coming in from Italy, Ireland, Russia, and now Mexico, who really want to work hard and really want to succeed and really want their kids to live better lives than them and aren’t sort of clipping coupons or hoping that they can hang on and meanwhile grew up as spoiled kids and so forth. In that respect, I don’t know how this moment is that different from the early 20th century.


This is a rampantly ideological position to take. Although it is no doubt true that some migrants do work hard to establish themselves, the statistics clearly show that many immigrant groups are far more likely to be welfare dependent than the natives. Consider this:


Bill Kristol has things exactly the wrong way around. White Americans are far less likely to be "clipping coupons" than the wave of immigrants from Mexico. And yet Kristol calls white Americans "decadent, lazy, spoiled" and believes that they need to be race replaced by "waves of people" from Mexico.

Kristol's attitude is also rampantly ideological in the sense that he sees people as interchangeable units, with those best fitted to the needs of the market being the ones who can justify their place in society. In theory, the liberal take on society is supposed to uphold the rights of the individual and to promote "individuality". But look at what happens in practice. Individuals are stripped of those qualities that tie them to a particular place, people and tradition, and are instead standardised as part of an anonymous mass serving the market, and can therefore be readily replaced.

If you can be so readily replaced on the grounds of lacking dedication to the market then you cannot claim to have much standing as an individual in society. You have value not on the grounds of your individuality but rather on your utility.
Posted by Mark Richardson at 11:14 pm