Rita on the Opression Olympics

Strange to say, one of the most talented writers to emerge on the Australian right is a young Persian immigrant woman named Rita Panahi. She writes a column for Melbourne's Herald Sun, a mass circulation newspaper.

She even defends heterosexual Anglo men, such a rare thing within the mainstream culture we live in. Here is an excerpt from her most recent column:


Where do you rank in the Oppression Olympics? Are you floundering at the bottom of the table among the privileged white, Christian, heteronormative cisgender males with no moral authority to speak on any issue? Or are you going for gold as a transgendered pansexual Muslim woman of colour?

...The new aristocracy is determined by one's victimhood status; the more grievance points you accumulate, the greater your mandate to preach.

Of course, if you don't identify as a victim then your oppression ranking plummets to Anglo-male depths, but if you play the game right, you can use your grievance status to score plum roles as well as dodge all responsibility if you happen to fail miserably. One popular tactic among the victimhood brigade is the refusal to accept any criticism that comes from those who are of a different race, religion, gender, sexuality or whatever else differentiates you.

Men should not speak about feminism, whites should butt out of black or ethnic debates, and non-Muslims should never pass judgment on Islam.

"Until you are an Aboriginal person, don't criticise me," she said.

Really? Can I play that card the next time I receive unhinged abuse from the always bitter and outraged feminist frightbats who are invariably middle-class white women? From now on my standard response to any and all criticism will be: "Unless you are an American-born Persian Australian, don't judge me." 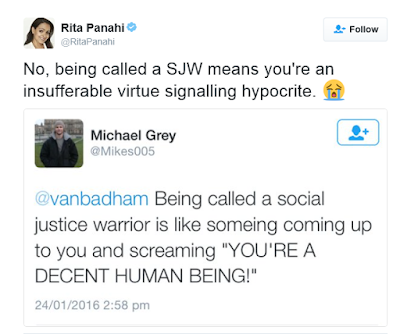 Posted by Mark Richardson at 6:35 pm