The inner north is home to the most left-wing of Melbourne's residents. I occasionally walk through an inner suburban area called Fitzroy. Much of it is beautifully historically preserved and it gives you a wonderful sense of spirit of place. Its residents, however, are not traditionalists but Greens supporters (despite the nearest countryside being at least 20km away). The old Victorian era town hall is draped with banners proclaiming "refugees are welcome here" and the Palestinian flag flies from the mast.

Back in the 1960s, however, there were plans to demolish these suburbs and to build housing commission towers. The plans were only partly carried out. And so adjoining beautiful, historic, leftist Fitzroy are areas of ugly towers mostly housing Muslim refugees from Africa.

Enter The Age, Melbourne's left-liberal daily newspaper. It assigned a reporter to look at where the Greens voting residents of Melbourne's inner north send their children to school. And guess what? Despite the "refugees are welcome here" banners on the town hall, these Greens supporters have chosen to send their children away from the refugees, to be educated amongst other white children. 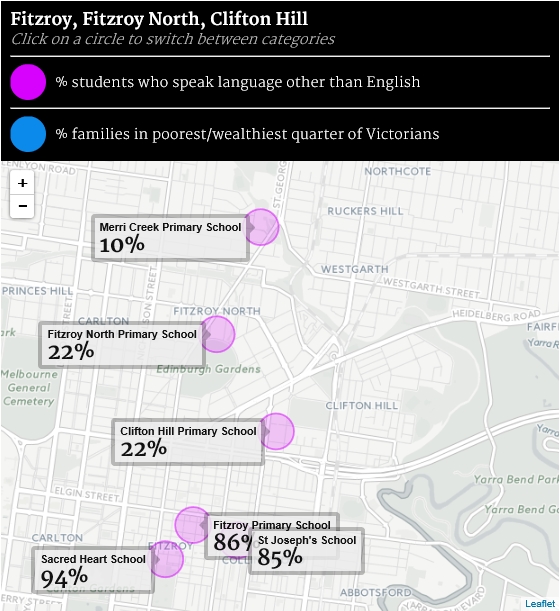 You can see from the graph above that the primary schools located closest to the refugee estates (e.g. Fitzroy Primary School) have only a very small percentage of students from English speaking families. The "white flight" is taking place to the schools to the north such as Clifton Hill Primary.

Here is how The Age put it:

In the Greens-voting socially liberal enclaves of the inner north, white middle class families have deserted the schools closest to the remaining commission housing towers, while competing for spots in a handful of schools seen to have greater prestige.

Schools such as Fitzroy Primary, Carlton Primary School and Mount Alexander College in Flemington have become catchments for poor students of African heritage, many of whom live in the flats. Between 71 to 94 per cent of students attending these schools speak a language other than English at home.

The average median house price in some of these school's suburbs teeters around $1 million, yet about 60 to 80 per cent of students at these schools are among the poorest in the state.

White families with higher incomes are opting to enrol their children in over-subscribed schools a few suburbs away.

They favour Clifton Hill, Princes Hill and Merri Creek primary schools, where 79 to 84 per cent of families are among the state's richest.

These schools – with just 10 to 30 per cent of students speaking a language other than English at home – offer accelerated programs, overseas trips and boast above-average NAPLAN scores.

Abeselom Nega, an Ethiopian refugee and community leader, is alarmed by this trend.

"The white parents don't send their kids to these schools because all they see is black kids," says Mr Nega, who sits on the board of the Victorian Equal Opportunity and Human Rights Commission.


One writer for The Age believes that the parents are right to send their children away from the local schools. She justifies this on personal experience. Her own left-wing parents sent her to a local school with the following results:


Ours was a school in which the majority of students came from non-English-speaking backgrounds, and the literacy level was so low that instead of asking us to read the assigned VCE English text, our teacher walked into class one day with a video and said, "I'd ask you to read the book, but let's face it, none of you will, so here's the movie version instead."

It was a school in which, if you read for fun, you hid it lest you got your head kicked in. (A shame, since our school's version of an "accelerated learning program" was the teacher pretending not to notice when you stopped listening and quietly read a book under your desk.)

As an adult, probably to alleviate my white, middle-class guilt (certainly not because I valued education), I volunteered to help with reading in a grade 5 class at the local primary school – one of the "ghetto housing commission schools" mentioned in The Age's story. As the highly competent teacher struggled to teach the kids who could barely read the alphabet while simultaneously challenging the kids who had an average grade 5 reading age, it was clear she had an impossible task.

...The idea that it's the so-called "high achieving" kids' social responsibility to sacrifice their own education to somehow drag up the level of their peers (by osmosis?) is obnoxious and entitled.

Is it so hard to imagine that a parent might not want their kid to be the one to suffer? Or, as the patron saint of the socially conscious (and Probably Not Racist) filmmaker Michael Moore said, when criticised for not sending his child to the local state school, "our daughter is not the one to be sacrificed to make things better".


But here's the thing. Alice Williams is herself a leftist (she is particularly radical on women's issues). And I don't see why leftists should be able to promote open borders, mass migration and a large influx of refugees and then say "but I don't want my own child to be negatively affected by this".

The leftist mindset is maddening because there is an assumption that a certain type of white lefty-liberal lifestyle will continue whilst the society around them is dissolved by leftist policies. They are managing it for now, but it is going to catch up with them soon enough.
Posted by Mark Richardson at 12:54 am