Sweden's government has operated something like an open borders policy for refugees. I noticed a couple of statistics in the news that highlight how short-sighted this policy is. The first statistic is that it takes a very long time for refugees to find employment. After 15 years in Sweden only a third have found work, which means that they have to be carried by the Swedish taxpayer: 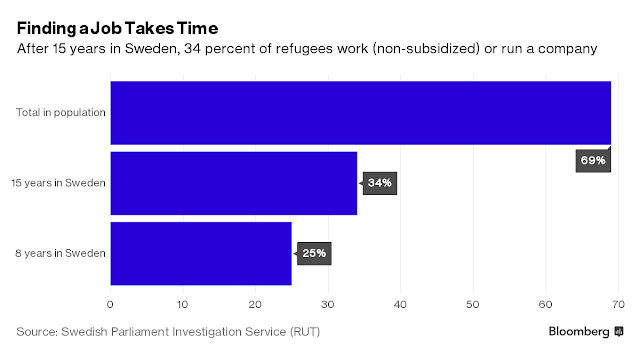 The second statistic is that for the first time since records began in the 1700s there are more men than women in Sweden, due in part to the fact that many of the refugees/economic migrants are young men from the Muslim world.

So a young Swedish male will find himself having to pay extra taxes to support the immigrants and at the same time deal with the distortions in the sex ratio caused by immigration. He will then be told to celebrate diversity.
Posted by Mark Richardson at 6:07 pm

Labels: immigration and the economy, Scandinavia