The European Union is on the warpath against Poland because of a change in media laws there. From what I can tell, the story runs roughly as follows. The media situation in Poland is similar to that in Australia. Most of the media is privately owned (mostly by German publishers) but there is also a state media (similar to our ABC and SBS). Just like in Australia, all of the media is liberal.

A conservative political party, Law and Justice, won the elections recently in Poland. They could see that if the entire media remained liberal, that Poland would inevitably continue to drift in a liberal direction. They wanted to make changes at the top of the state media but had to go through a tribunal which was stacked with liberals. So they passed a law allowing the changes to be made directly.


We simply want to cure our state of a few illnesses, so that it can once again be healthy. The previous government pursued a certain leftist concept of politics. As if the world could only move automatically in one direction according to a Marxist model - toward a new mix of races and cultures, a world of cyclists and vegetarians, who rely only on renewable energy and who fight against every form of religion.

That has nothing to do with traditional Polish values...the majority of Poles are moved by: tradition, a sense of history, a love of country, belief in God, and a normal family life between man and woman.


I do want to congratulate the Polish minister for standing so clearly against the view that the world can only ever move in one direction and for articulating a clear alternative direction.

The German political elite has attacked Poland because of the new media laws. The Poles, though, are giving back as good as they get:


Gunther Oettinger, European Commissioner for Digital Economy and Society, said that Poland should be placed under supervision because of its attempts to establish state control over public media as well as its plans to reform the Constitutional Court. The remarks did not go down well with the Polish Justice Minister, Zbigniew Ziobro.

“I am not in the habit of replying to silly comments on Poland made by foreign politicians,” Ziobro wrote in an open letter to Oettinger, PAP reported...The minister also accused Germany of ‘hushing’ the media in its coverage of New Year’s Eve sexual assaults in Cologne.

‘[These events] were for several days hushed up by the German media...I came to the painful conclusion that it’s easier for you to talk about fictitious threats to media freedom in other countries than condemn censorship in your own country," wrote Ziobro.


He has a point, does he not? The German elite did try initially to censor reports of the attacks on German women in Cologne. The state broadcaster in Germany, ZDF, eventually apologised for not reporting the attacks. One ex-politician described the attempt to censor news of the event as follows:


It was "a scandal that it took days for the public media to take up the reports," former Interior Minister Hans-Peter Friedrich said, accusing journalists of operating a "cartel of silence and lockdown of news".

It therefore took about five days for the news to spread outside of Cologne and for mainstream news outlets to pick it up.

A spokesman for the Polish President also made this valid point:


In the last eight years we had no pluralism in the public media at all and no European Commissioner, no member of the European Parliament, deplored it.

Finally, a group of Polish volleyball fans unveiled a banner at a match against the German team. The banner reads "Protect your women, not our democracy." 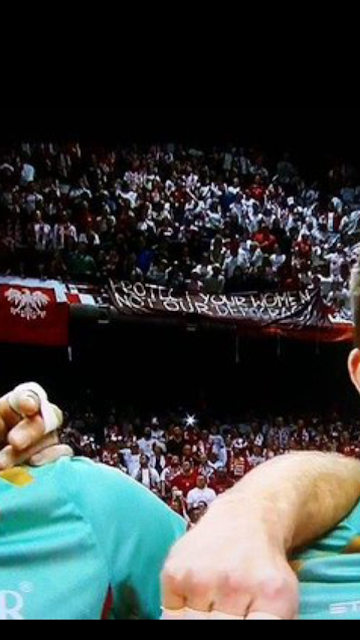 Posted by Mark Richardson at 10:07 pm