1963 was also the year that a design was to be selected for the new pilgrimage cathedral at Neviges. The designs most favoured by the jury were of the "hall church" type inspired by the functional modernism of Ludwig Mies van der Rohe's Chicago chapel:

This style was reflected in many of the designs; roughly half of the competition participants "presented an isolated box with a square plan". You can see similar Catholic churches scattered throughout Melbourne's suburbs. The term "hall church" is a good one, as they often give you the sense that you are visiting a community hall rather than a church. Although a lot of these churches were built from the 1960s to 90s, they are based on a Chicago model built in 1949, from architectural ideas developed in the 1920s.

But the Archbishop rejected the jury's recommendations to build in this style. The Archbishop felt that the proposed designs lacked anything to link the building to its role as a church of pilgrimage.

In 1964 the Archbishop decided on a design by the German architect Gottfried Böhm: 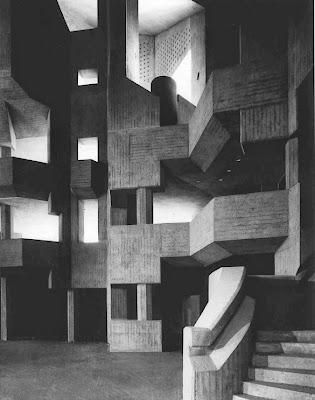 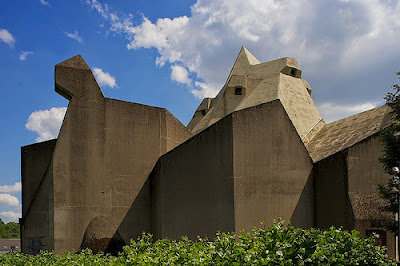 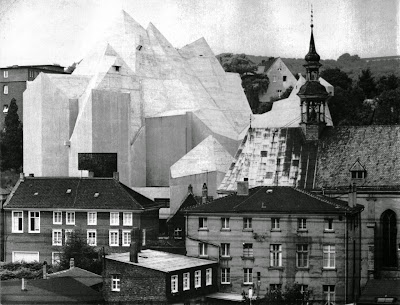 Is the Böhm design really all that much better? The hall churches are cool and ordinary, but Böhm's design is chaotic and random in its exterior and coldly massive (cavernous) in the interior.

I'm tempted to ask here: which design would you have gone for if you had been the Archbishop? Would you have taken the box or the rocky outcrop?

Sometimes when you wonder why certain decisions were made in the twentieth century it's because people opted for what they thought was the least bad option. But it's a pity to be limited in this way.

And we shouldn't underestimate how far back modernism in the arts goes. In terms of church architecture, things seemed to change radically from about the 1920s onwards.

Finally, here is another of Gottfried Böhm's churches, this time from Cologne: 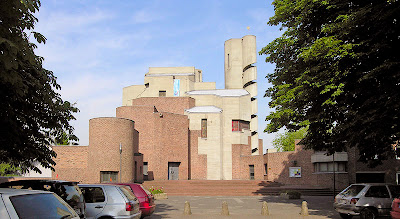 Is that really an improvement on traditional church architecture? (It looks a bit like a factory building to me.)
Posted by Mark Richardson at 9:46 pm