This day in Europe

It hasn't been widely reported in the Australian press but there have been riots in Stockholm for the past four nights. Last night saw violence in 15 suburbs. The riots began in the suburb of Husby, 82% of whose residents come from overseas backgrounds, largely from Turkey, Lebanon, Syria, Iraq and Somalia.

But the trouble isn't confined to Sweden. In England, two Muslim men slammed their car into a soldier and then attacked him with knives. The men then said "'We swear by almighty Allah we will never stop fighting you" and "You people will never be safe." Below is a picture of one of the killers with bloodstained hands: 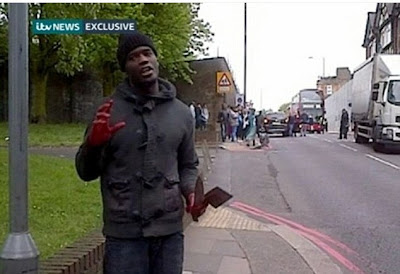 The picture I posted isn't the most disturbing one. If you go to the linked Daily Mail article, you'll find two pictures of young women walking casually past the killer whilst the victim lies close by on the street. These women don't seem worried to be brushing shoulders with one of their own men who has just committed a violent street murder.

Posted by Mark Richardson at 8:47 pm