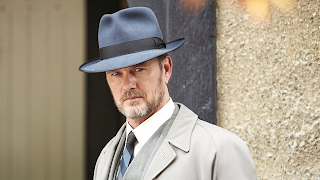 There's a new TV series here in Australia called The Doctor Blake Mysteries (it's also going to be shown on UK television). It's about a police surgeon in the regional city of Ballarat in the late 1950s who solves various police cases.

I do have some positive things to say about the series, but it has to be said that this is a show with a liberal message. You get a sense, in fact, of how the makers of the show imagine a liberal hero: he is a figure people respect and look up to, but he is outside of the establishment, and he has to battle the corruption within the conservative institutions of the city, such as the police, the army and the church.

(At the end of the last episode, an admiring female journalist asked Doctor Blake why he would choose to settle in such a conservative town and he answered "I'm here to make a difference".)

Could the show have been set, say, in the Melbourne of today? I don't think so, as the establishment now is so obviously a liberal one that it's difficult to imagine someone like Doctor Blake being a "liberal lone ranger" battling conservative institutions in the pursuit of justice.

I'm not the only one to have noticed the political slant of the series:


The show is a little redolent of Heartbeat and other nostalgic shows, with our hero (and his friends) improbably liberal...while various supporting characters are wheeled out to be reactionary and Wrong.

Even so, this is not the most striking aspect of the series. What's really different is that Doctor Blake is portrayed as a grown-up man. He looks like a grown-up man, he sounds like one and at times he asserts himself as one. I'm not sure that's happened in an Australian TV series since about the 1970s.


﻿﻿The show also does a good job in recreating the atmosphere of late 1950s Ballarat, and the historic architecture of the city is used to good effect. I was reminded by this of the potential of television to connect people to the past.

﻿﻿﻿﻿Despite not sharing the political leanings of The Doctor Blake Mysteries, I've enjoyed the series so far. And if there's a lesson to be drawn from it, it's that we should aim to make shows like it ourselves in the future. 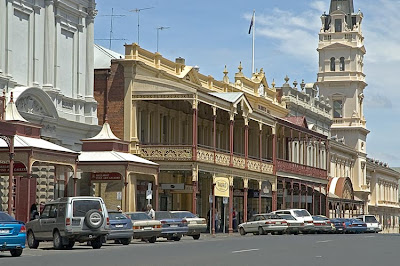 Posted by Mark Richardson at 10:29 pm