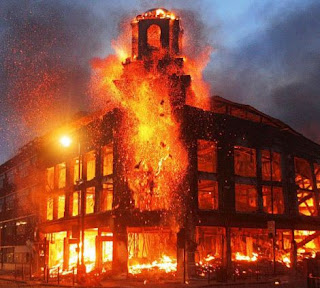 ﻿ Riots which began in the London suburb of Tottenham have now spread more widely throughout England. I was curious to learn more about Tottenham and had a look at the wikipedia entry. It seems to be a very diverse place:

Tottenham has a multicultural population, with many ethnic groups inhabiting the area. It contains one of the largest and most significant populations of African-Caribbean people. These were among the earliest immigrant groups to settle in the area, starting the UK's Windrush era. Soon after West African communities - notably the many Ghanaians - begun to migrate into the area. Between 1980 and the present day there has been a slow immigration of Colombians, Congolese, Albanian, Kurdish, Turkish-Cypriot, Turkish, Somalis, Irish, and Portuguese populations. South Tottenham is reported to be the most ethnically-diverse area in Europe, with up to 300 languages being spoken by its residents.

There is a crime problem:

Tottenham has been one of the main hotspots for gangs and gun crime in the United Kingdom during the past three decades. This followed the rise of gangs and drug wars throughout the area, notably those involving the Tottenham Mandem gang and various gangs from Hackney and all of the areas surrounding Tottenham, and the emergence of an organised crime ring known as the Turkish Mafia was said to have controlled more than 90% of the UK's heroin market.

Not a place I'd choose to raise a family in.

The riots have spread outside of London to places like Manchester. Which is curious given the story on the Manchester riot police from just a couple of months ago. A 51-year-old female officer was awarded £31,000 after failing to complete a shield run training exercise on time. It was claimed that she suffered "indirect discrimination" because as an older woman she wasn't able to keep to the established standards. She later passed the test when it was made easier for her.

I thought when I first read the story that it was a sign of the times in Britain that the riot squad was being organised to be non-discriminatory against older unfit women rather than to fulfil its proper purpose of keeping the streets in order. If it were me in charge, I'd be hiring young, physically intimidating males for the job. What if an event occurred in which it was important that every trained officer was able to fulfil the job to the highest level ... such as the riots that have been taking place for the past three nights.

What will British politicians do about the situation? Probably they'll try to buy off the "disaffected youth". But it won't work. There will be more trouble in the years to come.
Posted by Mark Richardson at 10:25 pm