Last week I reported on the attempt of boatloads of Sri Lankan Tamil refugees to land in Australia. The refugees claimed emotionally that they had nowhere else to go. I asked why they couldn't go to their ancestral homeland, the nearby state of Tamil Nadu in India.

There have been some interesting further developments. The Sri Lankan High Commissioner to Australia has noted that the spokesmen for the Tamils speak English with a distinct American accent and have therefore probably resided recently in a Western country. He therefore doubts that there would be any problem with them returning to Sri Lanka.

One of the spokesmen, Alex, explained his accent by stating that he "worked at an American call centre in Chennai for three years where he was taught to speak with an American accent."

Where is Chennai? It is the city formerly known as Madras and is the capital city of Tamil Nadu in India! 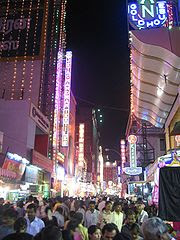 So not only is it possible for "refugees" like Alex to live in Tamil Nadu, he admits that he has already done so. Furthermore, he was able to obtain work in Chennai, where the economy is booming (it's estimated that Chennai's economy will grow 250% over the next 16 years).

The picture to the left shows a shopping mall in Chennai. The photo below it shows one of the numerous software parks in the city.

The point is that Chennai is not an economic basket case, but has a rapidly modernising economy. Tamils like Alex have already been able to move there and work there and so there is no obvious reason why they shouldn't have patiently taken advantage of the growing economy in Chennai - rather than taking a gamble on paying smugglers to get to Australia instead.

In my previous post I also asked why mainstream journalists hadn't asked about the Tamil Nadu option. Well, two of them now have. Andrew Bolt of the Melbourne Herald Sun wrote:

Let’s presume (on little proof) that these educated and monied Tamils could not stay in Sri Lanka, and let’s ask where they could go instead. Well, just across a narrow strait from their island is the Tamil Nadu state of India, which is safe.


And Greg Sheridan of The Australian observed that:

Just being a Tamil does not make you a refugee. Moreover, if you are fleeing persecution as a Tamil in Sri Lanka, why wouldn't you go and live in Tamil Nadu, the giant Tamil state of India, just next door to Sri Lanka? India does not persecute people for being Tamils.


Although I give credit to Sheridan for writing openly about the issue, his piece does illustrate some of the problems with the political situation in Australia. Sheridan is amongst the most adventurous in venturing his opinions - but his views are still a long way from anything that might be considered conservative or traditionalist.

His basic argument is that continuing mass immigration is a great thing, but that the public will only accept it if the government maintains control over the process. Therefore, he thinks the Tamils should be made to go through normal channels of immigration rather than jumping the queue.

Why would he support mass immigration? Sheridan believes that most of the boat people arriving in Australia are not genuine refugees but illegal immigrants. However, he thinks the actions of the illegal immigrants are moral, even if politically unacceptable:

I make no moral criticism of the illegal immigrants. If I were living in Sri Lanka or Afghanistan and I could pay a people-smuggler $15,000 to get me to Australia, to enjoy everything from law and order and good weather to Medicare, Centrelink and good schools, I would make that effort.

But that understandable motivation does not make a person a refugee. I think Sri Lankans generally make excellent migrants to Australia. I have always favoured a larger immigration program and a larger refugee intake, but I want Australia to choose who it takes and to do so in an orderly way.


It doesn't occur to Greg Sheridan that someone might love their country enough to stay and work to improve the living conditions at home rather than simply packing their family up to move elsewhere.

There's no sense that nations are distinct entities with unique traditions to which we are more closely or more distantly connected. Little wonder, then, that Sheridan's understanding of the allegiance we owe to particular nations is so flimsy - or that he thinks it moral and reasonable for people to transport themselves to foreign cultures if, say, the welfare benefits or schools are better.

Our allegiance to our homeland shouldn't depend narrowly on the material conditions of life. What is more important is the love of our own enduring tradition, a sense of shared sacrifices through history and an appreciation of our own distinct culture.

And if the schools aren't as good as elsewhere? You work to improve them as part of a commitment to your own nation.
Posted by Mark Richardson at 2:55 pm