Is there a more obvious solution for the Tamil refugees? 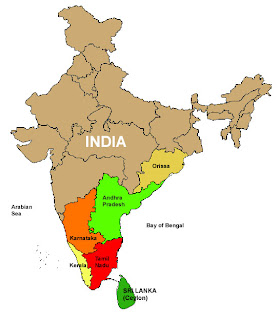 The headline news is the attempt of boatloads of Sri Lankan Tamil refugees to land in Australia. The Tamils were outraged when they were detained instead in Indonesia. They have claimed, in highly emotional terms, that Australia is the only place they have to go to.

I am not aware of a single journalist asking the obvious question. Why would the Tamils travel thousands of kilometres to a foreign land and culture, when they could have travelled 30km instead to the original Tamil homeland: the state of Tamil Nadu in India?

(The first map shows Sri Lanka in dark green just off the coast of Tamil Nadu in India in red.)

Tamil people are an ethnic group native to Tamil Nadu, a state in India, and the north-eastern region of Sri Lanka.


Yes, there has been a civil war in Sri Lanka. It's conceivable that some Tamils in Sri Lanka have been displaced. The most logical place for them to be resettled, surely, is Tamil Nadu in India, where the Tamil culture and people have a history going back perhaps to the year 1500 BC:

Possible evidence indicating the earliest presence of Tamil people in modern day Tamil Nadu are the megalithic urn burials, dating from around 1500 BC and onwards, which have been discovered at various locations in Tamil Nadu ... which conform to the descriptions of funerals in classical Tamil literature. 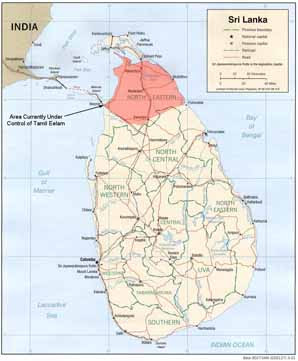 It seems to me that there are two likely scenarios here. First, the Tamils could have gone to the Tamil state in India but thought Australia a better option economically. In which case they are not being upfront about their choice of destination.

If any reader is aware of a reason why Tamil Nadu is not an option for the Tamil refugees I'd ask them to put it forward in the comments.

(The second map shows the area (in pink) that was once controlled by the Tamil Tigers in Sri Lanka. The map illustrates just how short a distance it is to Tamil Nadu in India.)
Posted by Mark Richardson at 8:26 pm