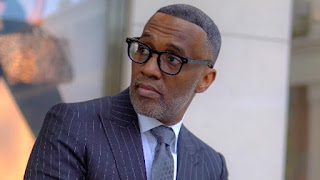 I only first watched a Kevin Samuels YouTube video about a month ago. Since then I have watched several more. Sadly, he died of heart issues at the age of 53 just this week.

I obviously do not know enough about his views to give a full endorsement. I will limit myself to one observation, namely that Kevin Samuels insisted on people hearing the truth, as a form of tough love, with the aim of repairing damage done to the African American community. He held not only African American men, but also women, to account for the decline of healthy family formation.  It is uncommon to see someone modelling this type of masculine behaviour, and so he was either condemned for "attacking" African American women or else respected by both men and women as a paternal figure missing in their lives.

I wrote a post last year titled "On being true" and noted that the word "true" has a modern meaning, "consistent with fact", and also a more ancient meaning, "loyal, steadfast, trustworthy, faithful". In a modern, liberal society, the quality of being "true" is in short supply in both senses of the word. I could sense watching Kevin Samuels' videos that he was exasperated by this as much as I am. He wanted people to think realistically about family formation, and was talented at drawing out unrealistic expectations and assumptions.

Liberalism is based, at least in part, on the idea that we should be free to follow our own will and that anything that limits our will is an unjust constraint that should be remedied by political action or by personal empowerment or by technological innovation. The liberal faith is that there will be "progress" toward these ends.

This is not a belief system that encourages individuals to recognise that there are constraints built into the nature of reality that we must acknowledge and prudently consider when making our life choices. Instead, the mindset of many of the women that Kevin Samuels interviewed was that a decent person should be rewarded by getting what they wanted. These women did not consider what they might contribute to a relationship; what men might be looking for in a woman; what stage of life they were at; where they stood in terms of attractiveness; and what it was realistic to expect of men in terms of employment status or finances or looks.

And here's the thing. As a generalisation women are not meant to be good at providing the reality principle. What we look for from women is emotional warmth, a talent for homemaking, the nurture of young infants, and some of the more appealing soft and sensitive qualities of the human personality. It is mostly a responsibility of men to provide the stable structure within which the feminine qualities can successfully operate and long-term, faithful relationships can be secured.

Men do not have the same authority in society to carry out this responsibility that they once had. What we can do, however, is to try to model a masculine personality which is tough enough to hold people (including ourselves) to account and to insist on the reality principle, even in a culture that sets itself against the idea that our lives should be ordered to an objective good and to a reality that exists outside of our own will and desires.

In the meantime, the chaos of modern relationships is likely to get worse. On this topic, I'll mention a new book that's just been released, the novel No Hard Feelings. It got my attention because it is set here in Melbourne and describes the life of a young woman, presumably taken from the experiences of the author herself (Genevieve Novak). The 20-something heroine is overworked, survives by drinking too much wine, has a therapist to provide advice, and has a dog and an emotionally unavailable boyfriend. The novel is part of a booming modern genre called "sad girl lit".

The sense you get from these books and authors is that there is no way out for these young women. Despite expensive therapy, they don't seem capable of critically reflecting on themselves or the culture. They continue to endorse the larger culture and to pursue what they believe to be "progressive" aspects of it. There is a deep gulf between their current state and what they would need to do to have better lives. They do not have the internal means to bridge the divide.

It is going to take a bracing dose of reality to shake things up. There will need to be not just one man or one leader, but a cohort of men who are willing to return to a tough love and a willingness to speak the truth for the culture to change. These men will have to be firm enough to withstand the inevitable criticism and insults. I suspect this won't happen all at once, but that there will be a smaller group of men who start the process and who become models for a larger group of men to follow.

Posted by Mark Richardson at 3:20 pm