Are Terfs really any better?

If you were to set out the basic traditionalist position on sex distinctions it would look something like this:

1. We are born male or female

2. If we are born male we are connected in our nature to the masculine; if female to the feminine

3. Masculine and feminine are real qualities. If we wish to fulfil our own created nature, we will seek to embody the better qualities of the masculine if we are men, and the feminine if we are women. In doing so, our self manifests a transcendent good that helps give meaning and purpose to our existence.

I got into a debate yesterday with a group of Terfs on this issue. These are "trans exclusionary radical feminists", i.e. feminists who do not believe that males can suddenly declare themselves to be women. They insist, just like traditionalists, that a woman is an adult human female. They would agree with traditionalists on the first proposition I set out above, namely that we are born male or female.

What struck me during the debate, however, was not the common ground but the vast gulf separating these Terfs from my own politics. I came away thinking that they had extraordinarily awful beliefs about men and women. I think it's useful to set out the reasons why I came to this conclusion.

Terfs might agree with traditionalists on the first proposition, but they entirely reject the next two. What this means is that they define a woman as someone who has female reproductive organs, but that is it. For them, a woman (or a man) can be absolutely anything else that they choose to be. Being a man or a woman has no further relevance to anyone's life, except for the fact of reproductive organs. So why then think it important? What is the point of the category itself if it is irrelevant to anything we might do or be?

In short, Terfs still hold very strongly to the distinction between sex and gender. They accept the fact of biological sex, but they think any sex based characteristics are merely "gender" that is socially constructed and oppressive.

When I suggested that these Terfs were reducing the category of womanhood to something meaningless, these are the type of responses I got:

As you can see, the Terfs were very firm in asserting that being a woman has no meaning apart from the fact of being born female ("women just exist", "individuals with a female body", "just existing in a way they want to", "a matter of biology and nothing else", "being born female...the beginning and end of how to be a woman"). When I challenged them about whether this was a meaningful category, they gave the only answer that they logically could, namely that the biological facts of menstruation and pregnancy gave a point of distinction between men and women. This, it seems to me, reduces women, as women, to something like "walking wombs".

b) Terfs still pander to transsexuals

Despite the fierce animosity between Terfs and transsexuals, the Terfs are still willing to go to extraordinary lengths to remodel the world so that transsexuals might better fit in.

Their idea is as follows. Let's say you have someone who is male but who wants to be female. What the Terfs want is for our concept of "male" to fully embrace what is female. In this way, the transsexual would not need to transition. Being male would incorporate the desire to be female.

They are serious about this. Look at the following tweet: 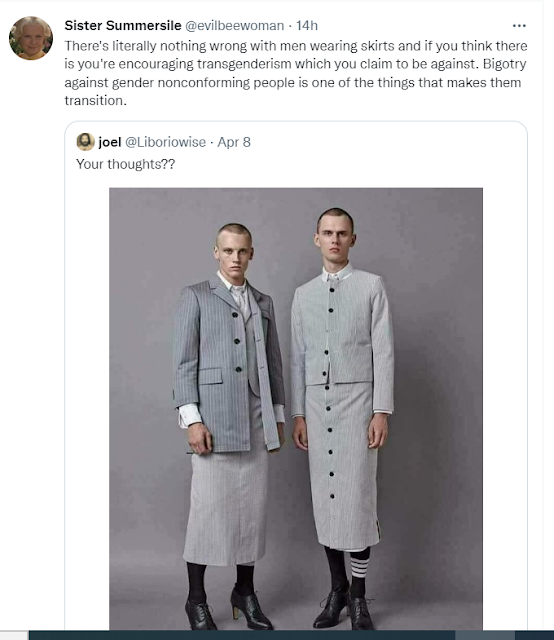 What do the Terfs think we need to do to make transsexuals feel more comfortable in their own bodies? The answer: completely sever any connection between our biological sex and our masculinity or femininity. We are just supposed to "exist with a male body" or "exist with a female body" and nothing more.

I would hope my traditionalist readers would understand by now why I think the Terf position is a complete non-starter for us.

The Terfs might argue along the lines of "be whatever you want" but when drawn out in debate they revert to the idea that masculinity and femininity are oppressive social constructs that lead to terrible life outcomes, such as domestic violence, rape and misogyny.

This, of course, raises the problem of what younger people are meant to do in response to these beliefs. Imagine you were a 14-year-old girl and you really believed that your own femininity and the masculinity of the boys around you were going to lead to violence and rape. Would it not potentially destabilise your psychological and emotional development? It seems to me to be a kind of mental trap that is difficult to escape from. If you cannot be feminine, and it is equally wrong to be masculine, and if there is no hope of ever having a happy relationship with the opposite sex (because masculinity is tarnished by its association with rape and violence), then along what lines is positive development into adulthood supposed to occur? Is it any wonder that so many young women are developing psychological issues?

Here is just a sample of what "Alliecat" had to say in relation to masculinity and femininity:

You can see that for this woman "gender" has been cast in the most negative terms. Given that it is such a core aspect of life, you can only imagine the detrimental psychological effects that such a worldview must have.

Something else occurs to me here also. For men to love women, they need to be able to form an idealised view of women as having admirable feminine character traits. Men don't need to believe that women are perfect, but they do need to uphold an image of women as being caring, sympathetic etc. But if young women are led to believe that such feminine traits are merely a path to oppression, then they won't be cultivated. Even worse, if young women are led to believe that womanhood is defined merely by reproductive organs, then this even further shifts the emphasis in relationships from love to sexuality. You then start to get the complaint from men that all women are offering is sex appeal.

d) In spite of all of the above, the Terfs are not neutral between men and women but promote radical female superiority

If all this wasn't enough, some of these Terfs are also committed to the idea of a matriarchal future, in which men have a very limited role in society.

This might seem odd, given all the complaints about patriarchy and misogyny and the like. You would think that the Terfs would envisage some form of sex-blind equality. Instead, you get self-descriptors in their Twitter bios that read "unironic Matriarchy proponent". What does this mean? Here is an example:

They are arguing that the family should be a female sphere over which men should exercise no influence, but should merely support financially. The children are hers alone, she should transmit her culture and values and not him, she should be the one to spend the money even if she does not earn it.

If these Terfs really want to live this way they could move to Japan. My understanding is that Japanese men are expected to work long hours, hand over their money to their wives, receive a small allowance and have little to do with the domestic sphere (Japanese men will often spend the hours after work socialising with other men rather than returning home).

Does the Japanese model work? I don't think so. Japan has falling birth rates (down to 1.36); very low marriage rates; a growing avoidance of romantic relationships; widespread prostitution; and a problem of young men withdrawing from society (hikikomori). Young men describe not wanting to get married because they see marriage simply as a burden. From a Guardian report:

The Terfs are not thinking things through. If men have no respected role within the family, why would they bother committing to it? It will come to be thought irrational.

I'm sorry that I can't report more positively on my debate with the Terfs. I suppose that I can commend a few of them for being willing to debate and not just name call, but that's the only positive spin I can put on it. They are still peddling wildly destructive ideas, to the point that it's difficult to see them as any better politically than their transsexual opponents.

Posted by Mark Richardson at 12:56 pm