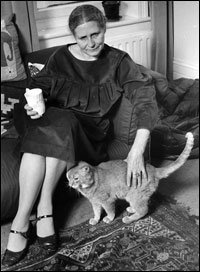 Doris Lessing was a celebrated novelist, who won the Nobel Prize in Literature in 2007.

She was born to English parents and grew up in Rhodesia in the 1920s. She moved back to England in the 1930s, got married, had children and then divorced in 1943, leaving the children with their father.

She became part of the great shift of Western intellectuals toward communism at this time, although she left the Communist Party after the Soviet invasion of Hungary in 1956. Later in life she became interested in Sufism.

I found an interview with Lessing in the New York Times from 1982 that raises some interesting themes.

The interview begins with Lessing distancing herself from feminism:


The idea that she has abandoned feminist concerns particularly irks her, since she never wrote from a consciously feminist point of view but was adopted by feminists in search of a heroine: ''What the feminists want of me is something they haven't examined because it comes from religion. They want me to bear witness. What they would really like me to say is, 'Ha, sisters, I stand with you side by side in your struggle toward the golden dawn where all those beastly men are no more.' Do they really want people to make oversimplified statements about men and women? In fact, they do. I've come with great regret to this conclusion.''


There are three themes here. First, Lessing identifies feminism as being hostile to men and as setting men and women apart from each other. I think that's worth noting as you sometimes hear the argument that feminism was somehow friendlier in the past than it is today. That is not how Lessing experienced it, despite being supportive of leftist causes herself.

Second, there is the utopianism of the radical left, the idea that human nature can be acted on, perhaps through education, or the dismantling of oppressive social norms or institutions etc., to create an ideal society  - a "golden dawn" in which an ideal of freedom and equality will be realised. This helps to explain the first theme - the hostility to men expressed by feminists. If it is men, acting through the patriarchy, that are the brake on achieving utopia, then men become the enemy of humanity and the villains holding back the realisation of humanity's ultimate purposes. Little wonder, given this world view, that feminists would be so hostile to the opposite sex.

Third, there is the idea that leftism is, to some degree, a kind of secularised religion. Lessing goes on to draw out this point:


''There are certain types of people who are political out of a kind of religious reason,'' she says, digging dirt ferociously out of the kitchen table. ''I think it's fairly common among socialists: They are, in fact, God-seekers, looking for the kingdom of God on earth. A lot of religious reformers have been like that, too. It's the same psychological set, trying to abolish the present in favor of some better future - always taking it for granted that there is a better future. If you don't believe in heaven, then you believe in socialism.

''When I was in my real Communist phase, I and the people around me really believed - but, of course, this makes us certifiable - that something like 10 years after World War II, the world would be Communist and perfect.''

''I was once an idealistic and utopian Communist,'' she said, ''and no, I am not proud of it. The real politicos are a very different animal, and I'm angry that I didn't notice that very evident fact.


I think it's worth pointing out here that the alternative to being a utopian socialist is not to be unconcerned with "the city of man". It is to recognise that human nature is flawed, and therefore social institutions and norms have an important role in limiting the ill effects of the baser aspects of our nature (as well as fostering the nobler ones). You do not make progress in society by abolishing all restraints on human nature; the task is a more complicated one of making some sort of good order out of the biological, social and spiritual nature of man, a task that draws more on the steady accumulation of wisdom, the making of culture, and the fostering of virtue than on simplistic political formulas.
Posted by Mark Richardson at 7:47 am